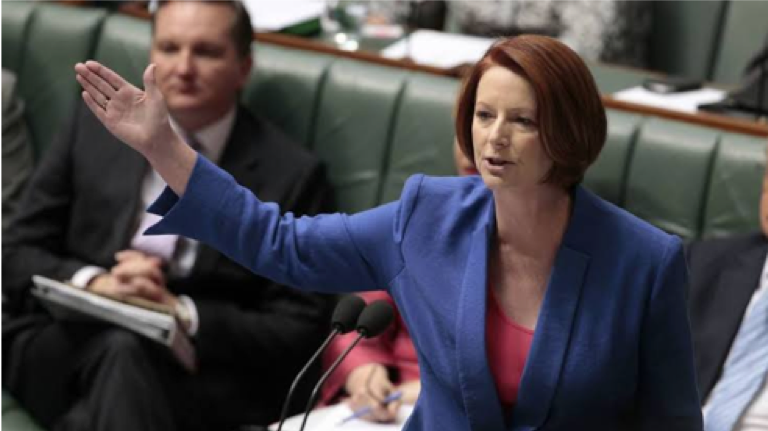 “I will not be lectured about sexism and misogyny by this man. I will not.”

This is an impassioned yet restrained articulation of a problem that is both nationally significant and deeply, deeply personal.

To understand the frustration that found its voice in this speech, it is useful to understand a little bit about the circumstances – especially as regards the issue of gender. Julia Gillard became Australia’s first female Prime Minister in June 2010. This speech was delivered in parliament on the 9th of October, 2012.

The leader of the opposition at the time, Tony Abbott, had made the following statement:

What the housewives of Australia need to understand as they do the ironing is that if they get it done commercially its going to go up in price, and their own power bills, when they switch the iron on, are going to go up.

(Gillard was) unfit for leadership because she was deliberately barren.

Even more personal, and most hateful, were the slanderous insults aired on talk-back radio. In these instances, the shock jock announcers were quoting listeners. But in doing so they were proliferating some astounding gender-based attacks. For example:

Immediately preceding the misogyny speech, Tony Abbot addressed the crowd in front of derogatory placards, including one adorned with the slogan; ‘ditch the witch‘.

Normally, Gillard ignored such taunts, preferring to revert to the requirements of her office, speaking about policy decisions and political matters of the day. Normally, she sidestepped the barrage of personal attacks on her gender, the fact that she was not married and did not have children. Normally, she showed no signs that any of these insults affected her in the slightest.

Out of Character – But in a Good Way

Throughout Gillard’s tenure as PM, my criticism of her speaking style was that she was too restrained. Not enough pathos; she often struggled to establish an emotional connection with her audience. Her tone was usually even, bordering on monotonous and her pace was very slow. Although she rarely misspoke and never put a foot wrong her lack of pathos affected her connection with the electorate at large.

But on this day the emotions were very real. We can see and hear anger and frustration. Gillard does not simply rant. She does not lose it. She controls her emotions and with every sentence she lets Abbott, and all of us know – enough is enough.

The heckling begins before even three words have left her mouth. She ignores it. She stares down her opponent, raises her voice slightly to indicate they will not shake her, and continues forcefully.

There is no doubt that this was an historic moment in the journey towards gender equality in Australian politics. However, in the context of this rhetorical analysis of speeches that matter, this example is remarkable because Gillard demonstrated such eloquence and power whilst harnessing the heat of the moment and using it to her advantage. Gender issues aside – this speech stands out as a powerful piece of oratory.