Speech 11: Jacinda Ardern (they were New Zealanders, they are us) 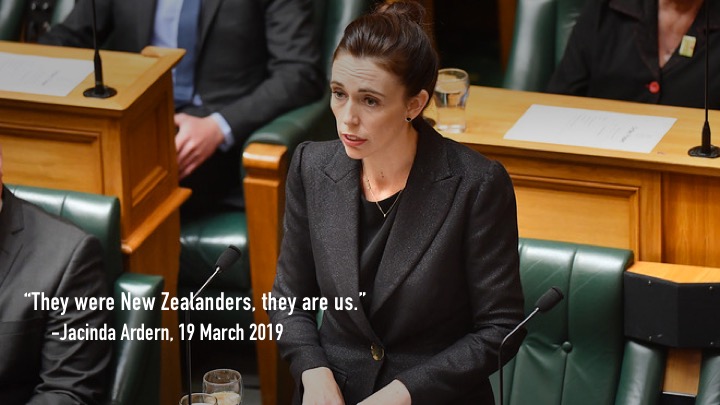 On this day one year ago, Jacinda Ardern delivered a compelling speech of quiet strength in the New Zealand parliament in the wake of the Christchurch Massacre.

Jacinta Ardern has made an impact on New Zealand and the world. Not because of her political position but because of her personal style of leadership. She combines strength and compassion and has projected both, in compelling balance through the range of challenges she has faced during her tenure.

On the 15th of March, the small country of New Zealand suffered a dreadful trauma with a massacre that occurred in a mosque in Christchurch, resulting in the deaths of 50 people engaged in morning prayer.

Ardern was on the air, reassuring the nation and the citizens of Christchurch. She was on the ground, to show support, solidarity and leadership as soon as she could get there. Then, on 19 March 2019, she delivered this speech in the New Zealand parliament.

Recognition and nuance to show respect

These opening words communicate a simple but powerful message. First in Arabic – a sign of respect to the victims. Then English – demonstrating a melding of cultures.

Perhaps the most poignant moment in the speech are these words that bind the victims to the nation:

“Those loved ones were brothers, daughters, fathers and children.

They were New Zealanders. They are us.

And because they are us, we, as a nation, we mourn them.”

Throughout the speech, there is genuine respect and recognition for a variety of individuals and groups. When Ardern recognises the particular pain of her fellow house members from Cantebury she alludes to the Christchurch earthquake, and a city still in recovery.

Her subtle pausing, attention to particulars, the use of proper nouns and individual names, the care she takes in pronunciation — all combine to convey a sense of care.

The PMs closing sentence echoes the theme of unity. This time English, then Maori, then Arabic. In another subtle arrangement, Ardern bestows the honour of both primacy and recency to the victims.

“We are one, they are us. Tatau tatau, Al salam Alaikum, Weh Rahmat Allah, Weh Barakaatuh.”

A not-so-subtle show of strength

In contrast to the specific names she uses, Jacinta Ardern is very clear in telling parliament that there is one name she will not speak. That of the shooter. A terrorist seeking notoriety will not be given what he wants. She also implores the audience in the house, plus national and international viewers, to not use his name.

“He sought many things from his act of terror, but one was notoriety. And that is why you will never hear me mention his name.

He is a terrorist. He is a criminal. He is an extremist. But he will, when I speak, be nameless.

And to others, I implore you: speak the names of those who were lost, rather than the name of the man who took them.

He may have sought notoriety, but we in New Zealand will give him nothing. Not even his name.”

The voice of leadership

This speech is a fine example of Jacinda Ardern’s unique leadership style. Consider her voice in contrast with global contemporaries. The ethos – personal power and credibility – is amplified by what she does not say and do. There is no self-aggrandisement, no political point-scoring and no dog-whistling. An example others could learn from.