Speech 13: Malala Yousafzai (one girl among many) 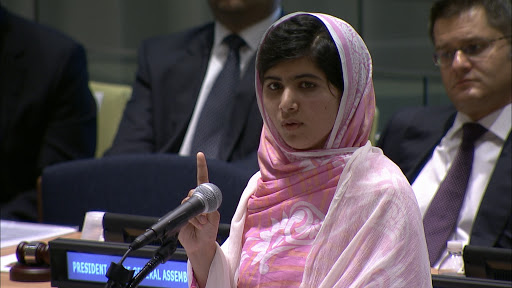 “Malala Day is not my day.  Today is the day of every woman, every boy and every girl who has raised their voice for their rights.”

This speech is remarkable for its humble strength and brave message.  And for the fact that it is delivered by a young girl who was shot in the face by the Taliban for the crime of going to school.

“So here I stand one girl among many and so I seek not for myself but so those without a voice can be heard”.

Malala’s terrible experience coupled with her brave agenda is enough to convey credibility.  She offers so much more.  Yes, her experience captures our attention.  But it is her ability to extract meaning and hope from the tragedy that adds and enduring quality to her message.

There are many manifestations of her innate credibility, but none as striking as the terrible reality of what happened to her.  In Malala’s words:

“Dear friends, on the 9th of October, 2012 the Taliban shot me on the left side of my forehead.  They shot my friends too.   They thought that the bullet would silence us but they failed.  And out of this silence came thousands of voices.

The terrorists thought that they would change my aim and stop my ambitions.

But nothing changed in my life except this – weakness, fear, and hopelessness died.  Strength, power, and courage was born.”

At the commencement of her speech, Malala spends a great deal of time thanking others.  The list is exhaustive:

Plus, she recognises that it is an honour to have the opportunity to speak at the UN.

For me, the most captivating evidence of Malala’s emotional resonance is mirrored in the reaction of her audience.  Watch the video and look for the barely-contained pride in the face of her father.

Then look to the reaction of the audience throughout her speech.  The expressions, spontaneous applause nods of agreement are not staged.  All are evidence of emotional resonance.

A plea for hope and action

The message embedded in Malala’s speech is a strong one.  She is asking for no less than human dignity, equality, and education for all.

Malala constructs an argument in such a way that her audience is empowered.  She implores her listeners to be brave.  We are provided with a reasonable basis on which to base that bravery.  If we stand up and raise our voices, we will succeed in the end, because the enemies of freedom are intimidated by free speech “the pen is mightier than the sword”.

Malala is not asking her audience to pick up arms against the terrorists.  The fight she seeks to foment is one of courageous conviction.  The real enemies are fear and ignorance, not the armed Taliban insurgent.  The best weapon against this insidious enemy is reading, writing — education.  And this is a battle we can all wage.

The rare quality of embodied bravery

Malala’s message is admirable.  Her conviction is strong.  Her personal sacrifice and resilience are undeniable.  But, the most powerful aspect of her message is her ability to rise above, even the most despicable – the terrorists who tried to take her life.  The fact that she can rebound from the terror and say; “even if there is a gun in my hand, and he stands in front of me, I would not shoot him,” signals we must take note.

The words are impressive in their own right.  That they are delivered by one so young who has, herself, experienced the most terrifying experience first hand is phenomenal.

Not just one girl among many, after all.

Here is the full video of Malala’s UN speech: