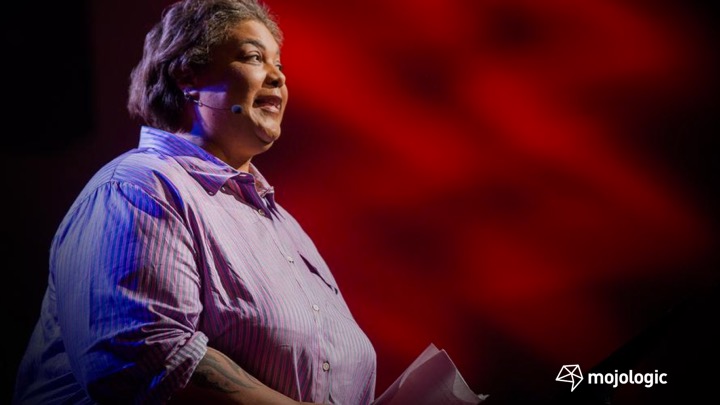 The act of persuasion always involves some sort of shift.  The speaker moves the audience member somehow – either their attitude or behaviour will be slightly (or drastically) transformed if the persuasion attempt is to be deemed successful.  Words can be used to inspire others to think, feel or do something differently.

The first job of the speaker is to assess where their audience currently sits in relation to the issue at hand.  What is the prevailing attitude, sentiment and dialogue?  Sometimes, the issue is confrontational.  Often, our pre-existing identity, gender, nationality or ethnicity means that our defences automatically go up.  Sometimes these defences are very strong.  In the face of contrary evidence, we tend to revert, with more vigour, to our default position.  Our nature is to defend against ideas that threaten who we believe ourselves to be.

What Roxane Gay manages in her 2015 TED talk is quite masterful.  She wins over her opposition through the use of humour.  Self-deprecating humour, at that. Her persona (based on her book by the same title) of the ‘Bad Feminist‘ is curious.  But more than that it signals that she is not perfect.  She tempers the implications of the position of ‘feminist’ with the admission that she herself, does not live up to whatever standards one might associate with feminism.  So, she makes what might, for some, seem to be a moralizing topic into one that is comedic.

She then goes on to land some important points and contentious points.

Note the paraphrasing of the US Declaration of Independence resplendent with its original rhetorical flourishes.

“I firmly believe in man-work, which is anything I do not want to do.  Including all domestic tasks but also bug-killing, trash removal, lawn care and vehicle maintenance.  I want no part of any of that.

Pink is my favourite colour.  I enjoy fashion magazine and pretty things.  I watch the bachelor and romantic comedies.  I have absurd fantasies about fairy tales coming true.”

Such amusing, real and relatable disclosure makes Roxane Gay approachable. And as such, it makes her message that much more approachable too.

Gay’s voice is soft pitched and evenly paced throughout this speech.  She is neither strident nor preachy.  Her voice does not invite the fight.  She doesn’t pre-emptively engage with her haters by signalling existing disagreement.  Rather, she goes gently into her central argument.

The Heart of the Matter

Gay speaks with conviction when she lays out her core message.  Her plea to women to pick up the mantle of feminism and to STOP attacking whatever version of feminism we see adopted by other women.  After an interesting story about Beyonce that draws the expected laughs, she makes this statement:

“We demand perfection from feminism because we are still fighting for so much.  We want so much.  We need so damn much.  We go far beyond reasonable constructive criticism to deconstructing any given woman’s feminism.  Tearing it apart until there is nothing left.  We do not need to do that.”

“I hope we all can be a little bit brave when the world needs such bravery.”

Humour and lightheartedness is not always the way.  Sometimes your message may require a different strategy.  But remember, head-on collisions of belief rarely result in a consensus of any kind.  Here is an example of that in Sydney at a panel discussion at Town Hall.  It is hard to watch but a good example of how the same message can land so differently based on the chosen approach of the speaker.

The next time you need to break through some closely held, well-defended belief systems, try this:

(And, if you can fit in a back door slight about Game of Thrones all the better.)