Speech 25: Nora Ephron (be the heroine of your life) 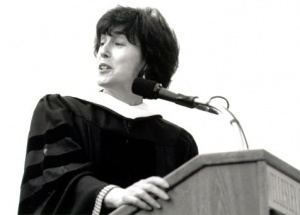 “What I’m saying is, don’t delude yourself that the powerful cultural values that wrecked the lives of so many of my classmates have vanished from the earth.”

Nora Ephron is the writer and filmmaker that brought us such classics as When Harry Met Sally, Julie and Julia and Silkwood.  So, we would expect sharp wit combined with humour and this speech delivers both.  Ephron goes further in her delivery of a compelling feminist message and a warning to the graduating class of Wellesley College in 1996.

Let the stories do the work

In the first two-thirds of this speech Nora Ephron builds connection and credibility with her audience.  Not by telling them why they should listen, but by showing them.  Stringing together a series of anecdotes about her time at Wellesley serves to show us that she knows of what she speaks.  These are well-crafted windows into her experience using the poignant evocative language of a writer and movie-maker:

I went to see my class dean and she said to me, “Let me give you some advice. You’ve worked so hard at Wellesley, when you marry, take a year off. Devote yourself to your husband and your marriage.” Of course it was stunning piece of advice to give me because I’d always intended to work after college. My mother was a career woman, and all of us, her four daughters, grew up understanding that the question, “What do you want to be when you grow up?” was as valid for girls as for boys. Take a year off being a wife. I always wondered what I was supposed to do in that year. Iron?

Select a theme and create a structure

Often a speech is aided by the use of structure.  This can help keep the speaker and the audience on track.  In this case, Nora Ephron uses a comedic hook, in reference too her own time at the college back in the early ’60s. Repeatedly posing the rhetorical question ‘how long ago was it?’ she sets up a series of vignettes, sharing her memories of life in the college for the previous generation.  She returns to the device to aid her structure throughout the first part of the speech. An organising structure like this can bring order to your narrative.

Then the same device is used to increase the seriousness:

How long ago? If you needed an abortion, you drove to a gas station in Union, New Jersey, with $500 in cash in an envelope and you were taken, blindfolded, to a motel room and operated on without an anesthetic.

How long ago was it? It was so long ago that among the things that I honestly cannot conceive of life without, that had not yet been invented: panty hose, lattes, Advil, pasta (there was no pasta then, there was only spaghetti and macaroni)—I sit here writing this speech on a computer next to a touch tone phone with an answering machine and a Rolodex, there are several CDs on my desk, a bottle of Snapple, there are felt-tip pens and an electric pencil sharpener… well, you get the point, it was a long time ago.

Use contrast to help land a serious message

After the amusing anecdotes and interesting insights, Ms Ephron comes to her central point.  This is a serious message, and though slightly preachy, it works.  The contrast with the humourous endearing part of speech is strong.  The change of pace makes the audience lean forward and listen up.  When she changes gears her language and pace also shifts.  Note the subtle shift in pace and intensity when she delivers this part:

Above all, be the heroine of your life, not the victim.

At the conclusion of the speech, Nora Ephron manages to lift the mood.  Changing tone again she shifts to a final piece of advice that is empowering and appropriate for the audience and the occasion:

Whatever you choose, however many roads you travel, I hope that you choose not to be a lady. I hope you will find some way to break the rules and make a little trouble out there. And I also hope that you will choose to make some of that trouble on behalf of women. Thank you. Good luck. The first act of your life is over. Welcome to the best years of your lives.

Here is the video of Nora Ephron’s commencement address at Wellesley College in 1996: