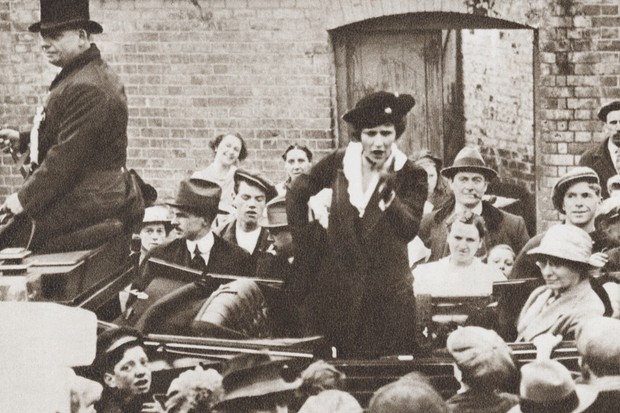 Nancy Astor was the first woman to sit in the British House of Commons, serving from 1919 to 1945.  Her maiden speech was delivered on the 24th of February, 1920.

More than a hundred years later we can extract some lessons in eloquence from this brave woman of conviction.  The overarching lesson has less to do with her rhetorical prowess and more with her character and tenacity.  Parliament is an inhospitable environment for many women in 2020, just imagine the vipers’ nest it would have been for Lady Astor.  Winston Churchill later admitted that we ‘tried to freeze you out’.  But, she kept turning up, speaking her mind and fighting for her beliefs.  You may not agree with her politics, in fact, many of her views are quite objectionable to the modern ear, but you cannot but admire her grit.

The subject of Astor’s maiden speech in parliament was alcohol.  She saught to bring about restrictions on the sale of the demon drink.  It is hard to imagine a less popular topic, given the times and the audience.  But, she felt strongly about this matter.  She set aside any lingering need to be liked and bravely made her case.  She acknowledged her own bravery; “…I am perfectly aware that it does take a bit of courage to address the house on that vexed question, drink.”  She went on to construct a persuasive argument, lining up a choice for her fellow members and making an appeal to the moral high ground.

Astor’s tenacity and belief on this issue were not about making a splash.  She followed through on her words.  The first bill that was ever introduced into British parliament by a woman, Astor herself, sought to restrict the sale of alcohol to persons under the age of 18.  The law was eventually passed and stands to this day.

Go Forth with Humour

Nancy Astor was famous for her wit.  She kept company with the likes of George Bernard Shaw who once referred to Astor as ‘a recklessly unladylike lady‘.  It is true that Nancy Astor could never have achieved the success that she did without substantial wealth and power, however, the real secret to her enduring success was her ability to engage.  She could and would enter into a verbal joust with the best of them.  As we have seen in the rhetoric of many women throughout history, seeking to make their point, a little bit of humour goes a long way.  It’s not about softening the message so much as coating it in a candy shell.

Astor repeatedly demonstrated an awareness that her admission to the club meant that she needed to acknowledge the written and unwritten rules of engagement.  As she does throughout this speech.  As if to say – I will play your game and win the odd point, but I will always return to what really matters.  She does just this when moving in to make the point:

“We, the women, know, and the men know, thousands of us in the country who work amongst the slums, and in prisons and hospitals, we know where John Barleycorn, as you are pleased to call him, leads to. It is not to Paradise. It promises Heaven, and too often it leads to Hell. I will not go on, because it would not be quite fair; but I do beg hon. Members to think of these things, and when they are talking about freedom, to think of the children.”

Start as you Mean to Continue

With this speech and many more delivered throughout her long tenure in public office, Nancy Astor sought to make a change in the world.  In her own words when reflecting on her calling she said “I wanted the world to get better and I knew that it couldn’t get better if it was going to be ruled by men.  As a matter of fact, I think it is amazing how well the men did for two thousand years considering they did it alone.”

I like to think her maiden speech was brilliantly crafted to strike just the right note of challenge and discord to shake up the parliament of the day.  She set the tone here as a politician that was wily, firey and quite funny.  The effect was to ruffle some very significant feathers.  The criticism from Churchill carries a hidden compliment;

“When you entered the House of Commons, I felt as if a woman had entered my bathroom and I had nothing to protect myself with except a sponge.” (Winston Churchill)