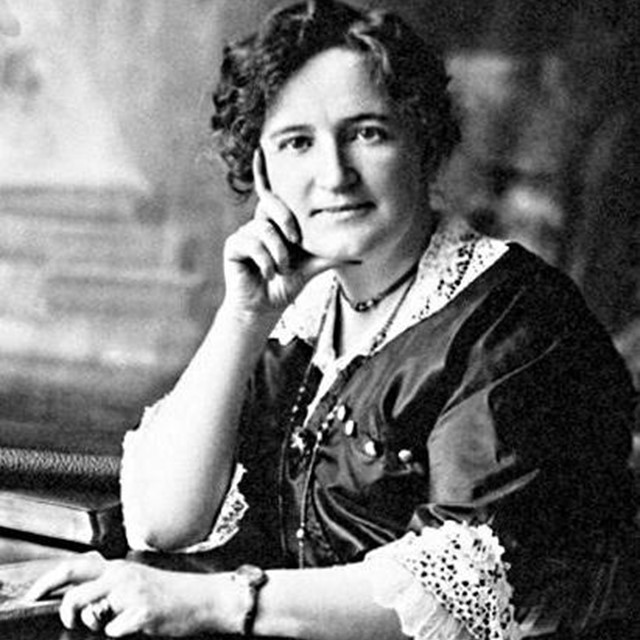 “Manhood suffrage would plunge our fair province into a perfect debauchery of extravagance, a perfect nightmare of expense…”

Nellie McClung, the Canadian author and suffragist, delivered a satirical address in a mock parliament performance, turning the tables on the prevailing ‘wisdom’ of the day – 1914.

Why isn’t this speech more famous?  It is hilarious, clever and brave.

How to Deal With An Absurd Argument?

Should women be allowed the right to vote?

This was the question flicked away by her Provincial Premier the previous day.  Largely, his argument centred around the assumption that to allow women the vote would threaten the fabric of family life.  He said that ‘nice women don’t want the vote‘ and to allow them to vote ‘would be a retrograde movement‘ that would ‘break up the home’.

How should one rebut such a ridiculous argument?

How do you keep your frustration in check?

In Nellie McClung’s case, with more ridicule.  A mock parliament address, heavy on the mockery.

Perhaps Mrs McClung felt that a logical refutation was too obvious.  Or that it would not capture the attention of her opponents.  In any case, her retort was a satirical performance in which she exposed how silly the Premier’s arguments sounded when played back, with the genders reversed.

The Use of Humour

Besides highlighting the ridiculous, humour can be used to great effect in the practice of persuasion.  As with Roxanne Gay in her TED talk ‘Confessions of a Bad Feminist’, being funny helps to break down barriers.  This is not to suggest that feminism (or anti-discrimination or activism of any kind) is always suited to a humorous approach.  But when a serious topic is treated lightly, those who would otherwise reject your argument without consideration may just lean in for a laugh.

“Do you never read, gentlemen? Do you not know of the disgraceful happenings in countries cursed by manhood suffrage? Do you not know the fearful odium into which the polls have fallen—is it possible you do not know the origin of that offensive word “Poll-cat”, do you not know that men are creatures of habit—give them an inch—and they will steal the whole sub-division, and although it is quite true, as you say, the polls are only open once in four years—when men once get the habit—who knows where it will end—it is hard enough to keep them at home now!”

The genius of this approach might not be immediately obvious.  Of course, you hear the sarcasm, the humour and the withering impact of such a blatant pastiche.  But what you also get is a bright light shone on the fallacious reasoning at play among the power-brokers of the day.  One by one, McClung dismantles that arguments against female suffrage.  Not by rational argument but by exposing the fallacious reasoning.

Here are a few examples of McClung’s stealthy logical refutations:

On 28 January 1916, Manitoba became the first Canadian province to extend the vote to women.

The full speech is provided below.

Gentlemen of the Delegation:—

It gives me great pleasure to welcome you here to-day, — we like delegations, and altho this is the first time you have asked us for the vote, we hope it will not be the last…. We wish to congratulate you too, on the quiet, and ladylike way in which you have come into our presence …

But I cannot do what you ask me to do, for the facts are all against you!…

Manhood suffrage would plunge our fair province into a perfect debauchery of extravagance, a perfect nightmare of expense…. You are asking me to put men, not only under clouds, but under barns, and I tell you frankly, I wont do it, for I have always loved and reverenced men.

… Oh no, no, man was made for something higher and holier than voting. Men were made to support families and homes which are the bulwark of the nation. What is home without a father? What is home without a bank account?… Shall I call men away from the useful plow and the necessary harrow to talk loud on street corners about things which do not concern them!…

In the United States of America when men vote, there is one divorce for every marriage, – for politics unsettle men, and that leads to unsettled bills, and broken furniture, and broken vows. When you ask me for the vote, you are asking me to break up peaceful and happy homes and wreck innocent lives, and I tell you again frankly, I will not do it. I am an old-fashioned woman, I believe in the sanctity of marriage.

… Men in politics have given us many unhappy examples – Nero, Herod, King John, are not worthy heroes, and yet you want me to hold up these men before our young people; I wonder any man ever dare ask for the vote in the light of such examples as these.

… With your little brain you cannot grasp what it means to run a Government such as this. Brains like yours only come in boys’ sizes. But you think you can dictate to me, a woman who was busy running Governments when you were sitting in your high chair, drumming on a tin plate with a spoon!

… my most earnest wish for this bright land of Promise is that I may long be spared to guide its destiny among the nations of the earth…. [I must] go forward in the strong hope that I may long be spared to be the proud standard bearer of the grand old Flag of this grand old party, which has gone down many times to disgrace, but thank God! never defeat!

… Oh no, no, man was made for something higher and holier than voting.