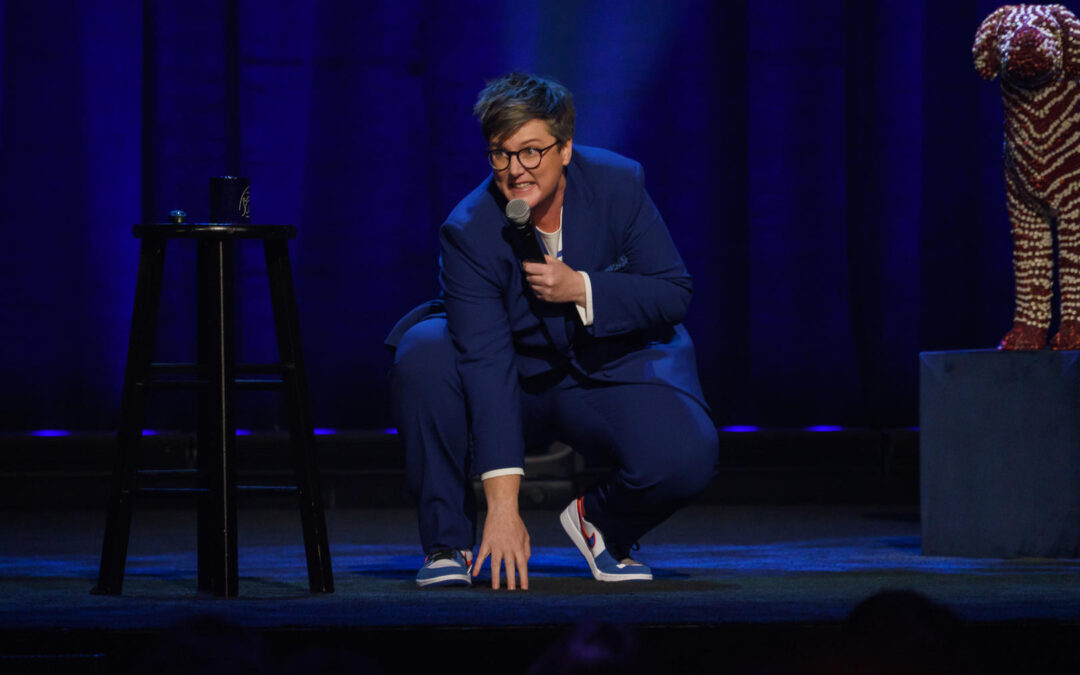 “I’m not here to collect your pity, I’m here to disrupt your confidence”

Hannah Gadsby’s 2nd Netflix 75 minute comedy performance is not, strictly speaking, a speech.  But, it’s not not a speech either.  There are so many lessons for communicators in Douglas, that you might miss whilst you are busy being entertained by this master.

Douglas is a form-busting, trope-challenging romp of comedic prowess.  Gadsby challenges rules for stand-up, social commentary and speech-making and it is marvellous.

Ten Things to Love About Douglas by Hannah Gadsby:

Three Communication Lessons We Can All Learn from Douglas

This is just masterful.  Hannah Gadsby successfully executes recognisable structure which is rather unusual for a stand-up routine that is usually a string of jokes, not necessarily connected.  In Douglas, we are a told what is going to happen, then she delivers.  Going one step further, Gadsby uses the set up as a joke in itself.  No spoilers here, but the payoff is sublime.

Structure is critical in forming a coherent speech.  Sometimes people resist structure, thinking in might impair creativity in some way.  That is why this example is so inspirational.  Creativity IN structure.  We also have a clear demonstration of how structure can be very satisfying for the speaker and audience alike.

In a Vulture podcast, Gadsby talks about the use of structure. She explains that she has a visual brain, so structure is something she thinks about a lot:

In Douglas, I decided to experiment with the call-forward. It’s dumb, but I thought, Oh well, I’m in this silly position now where I suddenly have a huge audience I didn’t intend on or think I’d have, so let’s play. And so at the beginning of the show, I pepper things that aren’t funny when I say them, but then it becomes repetition of language. I used the basic structure of a fugue. So it has the prelude, and then I have several ideas. It’s clearly not musical, because it’s spoken, but it’s the way I frame an idea. So I use story and then I use rant, and then the story, and then I connect them all. As the material built, I had the framework in which to hang it.

To be trusted and believed a speaker must build a connection with their audience.  One of the best ways to do this is to allow them to see you by creating opportunities for the audience to peek behind the curtain.  How can you let them in a little?  Without the dreaded overshare the skilled speaker carefully selects just the right tidbit to disclose.

Although Gadsby proclaims herself to be shy, this does not mean she is closed.  In Nannette, we learned about the pain of homophobia.  In Douglas, we hear her first-hand account of living through an autism diagnosis.  Neither engenders pity.  Instead, we are drawn to her side.  Gadsby manages to leverage her personal disclosures for comic effect, launching jokes that are self-deprecating but never self-insulting”  ‘I find it very difficult to connect to others because my brain takes me to places where nobody else lives’.  Once we are on the hook and on her side, Gadsby says; ‘I’m not here to collect your pity I’m here to disrupt your confidence.’

In her earlier performance Nanette, Gadsby explains the role of the comedian to build up tension and then provide a release.  That is the satisfaction we all get from a well-told joke.  There are parallels to other forms of oratory.  We should all consider the emotional state of the audience.  How will you find them and how will you shift them?  Can you create discomfort and then allow a joke (or just a less intense point) to let the audience off the hook.  The danger of tension without release is that you create an environment in which the audience wants to protect themselves.  Too much preachiness and we will rebel.

Hannah Gadsby makes you think differently about some pretty serious topics.  It might seem that her main goal is to make us laugh.  This is comedy after all – but she achieves so much more.

Get in touch to learn how you can enhance your communication skills.

If you haven’t caught Douglas by Hannah Gadsby, I highly recommend!