Speech 03: Greta Thunberg (Our house is on fire) 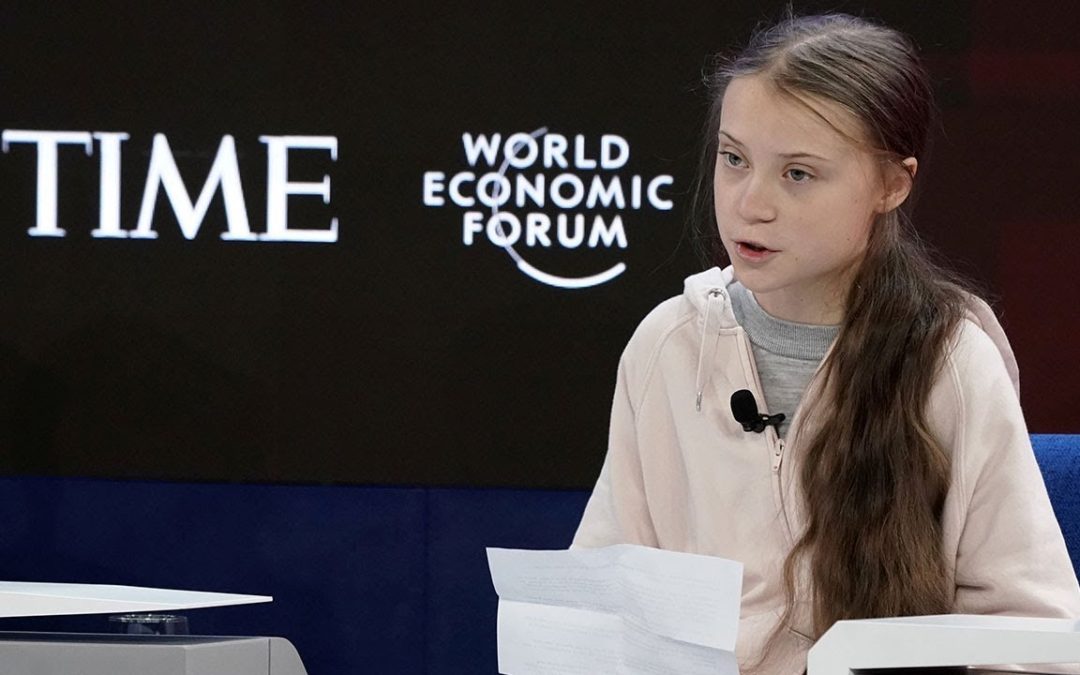 The Outrage of a Child

How can a diminutive 17-year-old girl from Sweden hold her ground in front of an audience of world leaders at Davos? A rhetorical analysis of her speech provides some answers.

A Powerful (if disturbing) Metaphor

Greta Thunberg continues the metaphor of a house on fire. It is simple, universal and very troubling. This house contains children – your children- who are already burning or in imminent danger. Thunberg shows us how a well-crafted metaphor can punctuate a message.

The metaphor is used in the title of the speech, outlined in her hook and further used to create a sense of imminent danger. Thunberg weaves her ‘house on fire’ through her otherwise fact- infused presentation. Picking up the metaphor again in her conclusion, she successfully imprints the image in the minds of her audience.

The tone of Thunberg’s address is one of condemnation. Like a parent scolding a child. A child that has been found out not doing what was expected of them – for being irresponsible. But Greta flips the roles. She is the child and has been forced into the role of the parent.

The casting of the roles is extended further. Greta assumes responsibility to be the voice of all children. She uses the first person plural throughout – it is ‘we’ and ‘us’ (the children). Those who have no actual power but who have the deepest vested interest as heirs to the planet.

In this game of role reversal, she scolds us for playing games, reducing the politics of ideology to a petty squabble:

This is not about right or left. We couldn’t care less about your party poltics. From a sustainability perspective the right, the left as well as the centre have all failed.

We have been told.

Rarely, do we hear such direct language used in the expression of the purpose in a speech. Without equivocation or apology Thunberg demands:

Our emissions have to stop if we are to stay below the 1.5 degree target.

Then, after a bit of education on why and what insufficient action looks like, she lands this:

We demand at this year’s World Economic Forum – participants from all companies, banks, institutions and governments immediately halt all investments in fossil fuel exploration and extraction. Immediately end all fossil fuel subsidies. And immediately and completely divest from fossil fuels.

We want these things done now.

This is the outcome she demands. You might not agree, but you cannot say you don’t understand exactly what she is calling for. She goes further and makes it clear WHOM she demands this of (government and business leaders) and she tells us by WHEN (NOW!) with a clear a measure of success (1.5-degree target or lower). For a 17 year old she seems well versed in the ubiquitous SMART objectives.

Aristotle tells us that one of the means of persuasion is through the character and credibility of the speaker – or ethos.

Often, in a business or political context we attempt to build credibility by providing our credentials – in the form of qualifications, commendations, expertise or experience. Thunberg has none of this to her name. And yet somehow she is credible – why?

Ethos also involves an ethical appeal. What should one do? The ethics of climate change action is at the very heart of Thunberg’s message and this speech is no different.

Our tendency to trust the veracity of Greta Thunberg’s words is enhanced by her personal communication style. She is extremely forthright and often downright challenging. She is bold and unapologetic. This speech is devoid of humour and she does not attempt to soften the message. She does not try to ingratiate herself with her audience. There are no signs of self-aggrandisement.

It is her very boldness, reflecting a strong personal conviction that makes us trust that she means what she says.

Consistency & Commitment is one of the Principles of Persuasion outlined by Robert Cialdini, American psychologist and author. It is a psychological tendency whereby people want their actions to be consistent with their inner beliefs. An absence of consistency creates dissonance. Thunberg successfully creates discomfort for her audience by reminding them of their Paris Agreement commitments:

The fact that the USA is leaving the Paris accord seemed to worry and outrage everyone. And it should. But the fact that we are all about to fail the commitments that you all signed up for in the Paris agreement doesn’t seem to bother the people in power even the least.

The Davos address is a fine example of Thunberg-ness. In this speech, she keeps her emotions in check but manages to imbue her message with non-verbal cues perfectly aligned to the purpose.

Her facial expressions are appropriately animated. She thrusts her head forward to emphasise a point. When she lands one of her accusations she pauses, glances around the room, connecting with her audience. She is seeking to stare down those that gaze back. The slight delay enhances her role as the scolding parent.

We feel as though there is nowhere to hide.

Will Greta Thunberg prove to be a historically significant speaker and leader? In the years to come, we will be able to judge her overall impact. In the meantime, we can say with certainty that her influence is remarkable. Her presence at this event and others of similar global significance is a feat in itself.

In the words of Jerry Seinfeld, sing it sister!

Watch the full broadcast of Greta Thunberg’s speech at Davos.