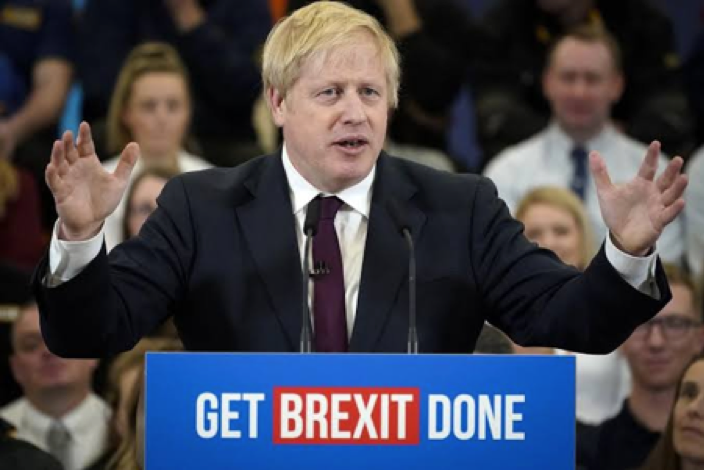 A Campaign Speech to Unite a Divided Country

and win an election…

There are many, many examples of Boris Johnson at the podium. The Tory victory in the recent UK election owes a great deal to the rhetorical skill displayed by Boris Johnson. Love him or hate him, you must agree he did something right during his campaign to produce this historic result.

A Case in Point

For this, the fourth instalment of the mojologic ‘Speech a Week’ series, we will consider a particularly dramatic example – Boris Johnson’s final rally speech of the campaign.

And what a speech it was. Like all performers, politicians at the podium feed off the energy of the audience. Here, Boris was preaching to the choir. He artfully leverages the frenzy of support to produce a compelling, interactive speech. He is aware of the audience support and he brings them into the speech. You can see him riffing a bit – building momentum.

The measure of success in a campaign speech, of course, is whether or not the politician persuades new or swing voters to choose them. We know how that story ends. Let’s examine why.

A Lifetime Spent Honing his Craft

He honed his skills at the Oxford University Debating Union where he was neck-deep in the game. The story of his experience is a story well told here, by Neil Sherlock, and it is portentous of the ambitions to come. Whilst other British students may have been pursuing personal development on the rugby pitch, the football field or the stage, Johnson’s arena was the Oxford Union.

In this place, you will find cut-throat competitiveness, strategy and take-downs just as on the sporting field. You will find opening night nerves, spotlight addiction and egomania, just as in the theatre.

The rules are different. When watching a union debate you will be impressed by the eloquence and confidence of the speakers. The novice observer may not notice the logical leaps, hyperbolic build-up, crafty sledging and feigned fanaticism. But this is where Boris Johnson cut his teeth. His devotion to his oratorical craft continued throughout his career as a practitioner. He developed an academic curiosity about the rhetorical prowess of his hero, Winton Churchill. Johnson’s style is seemingly effortless, but it is well-honed, intentional and very effective.

He’s Got More than a Few

The first observation when analysing this speech is the multitude of rhetorical techniques. I mean, there is barely a sentence that does not employ a figure or trope. The idea is that when you know what to look for, you can strip out the wordplay and examine the underlying message. But I am not sure that is true in this case, the figures are incessant and lyrical. The audience is swept along.

A figure of speech is any deviation from a literal statement or from the common usage of language. We know Boris is well versed in rhetorical technique and here we have an example of that technique in action.

When you ask a question then immediately provide an answer. Similar to a rhetorical question (and he has a fair few of those too!) – except with hypophora there is an answer immediately supplied.

There is only one mathematical alternative to a working majority conservative government. You know what it is?

You know what it is?

And this one we hear more than once:

What is it we are going to do?

And just to demonstrate how adept at this particular figure, here is a veritable flurry:

How many new hospitals are we going to build?

How many more nurses?

How many more police officers?

What are we doing with every school – every primary and every secondary school in the country?

When you apply a word or phrase to something that is not literally applicable in order to suggest a resemblance. Boris uses these with reckless abandon:

Final sprint towards a golden future

Act one, scene one of the Corbyn Premiership

When you repeat the same sound at the beginning of successive words. Johnson does this with the added emphasis of a strident hand gesture and a slow and deliberate, almost percussive, delivery.

This example is positively gymnastic in its execution. Boris applies both anaphora and epistrophe, combined with a good measure of hyperbole towards the climax of the speech in this ticolon:

We have 24 hours to end the deadlock

24 hours to break the gridlock

24 hours in which we can remove the parliamentary roadblock…

When you use words that have come to mean something that is indecipherable from their actual meaning.

Boris says this in reference to the opposition potentially forming a coalition with Nicola Sturgeon:

We know she’d get her her way, we know who wears the trousers or who would wear the trousers in that relationship.

A figure of repetition when you use redundant or unnecessary words.

Straight out repetition, such as this:

That is the choice.

That is the choice.

It is very very clear.

And it is very very stark.

When used as a figure of speech a tautology is when you say the same thing over again using different words.

Here is a short piece of Bois’ tautological roll:

Saying it three times, it seems, is just the right amount.

The problem with tautology as a figure of speech is that it opens the door to a logically flawed argument. A tautology is a circular argument. Where the conclusion of the argument is its own premise. For example:

Such an argument is a tautology because it excludes no logical possibilities. Very similar to Johnson’s stance on Brexit:

The debating skills of reframing and misdirection are serving him well.

In debating terms, tautological arguments are actually considered bad form because they preclude the possibility of a meaningful clash. No fun.

Although they appear to be acceptable on the campaign trail, perhaps this is not quite the self-proclaimed ‘iron logic’ we are promised.

Success Has Many Fathers

There are so many forces at play in an election.

In this case, the complexity of issues was successfully simplified (reduced?) into a single issue campaign platform. That single issue was consistently and skillfully communicated to the electorate. Minds were changed. The voting public swung in favour in Boris Johnson and the Conservative Party. This is, at least in part, due to the oratorical skill of the now, Prime Minister.

Watch the full video of Boris Johnson’s final campaign speech delivered on the 11th of December 2019 in London Olympic Park.