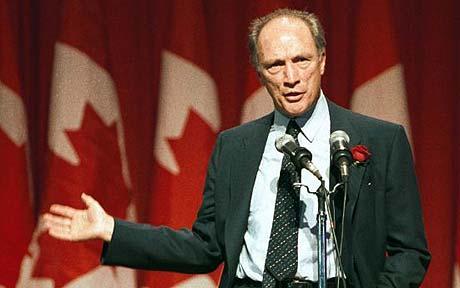 ‘‘Tonight I’m stepping down as your leader,” Mr. Trudeau said in a nationally televised address.

”And in two days we will be choosing a new leader, and you’ll find me there following him because we have more building to do.”

Before there was Justin, there was Pierre Elliott Trudeau.  After his appointment as Prime Minister, he won the 1968, 1972 and 1974 elections, before narrowly losing in 1979. He won a fourth election victory shortly afterwards, in 1980, and eventually retired from politics shortly before the 1984 Canadian federal election.

Pierre Elliott Trudeau was unforgettable as a personality and a politician.  He had a different style from his son, though we see echoes in the rhetoric of Justin Trudeau.  Pierre Trudeau always demonstrated bravery and confidence in leading the charge.  He was front-footed and unapologetic.  He was flamboyant, forthright and charismatic.  This speech is a fine example of his rhetorical technique.

The red rose in the lapel, the ability to recite poetry in English and French, the natural confidence as he takes the stage… These are all components of Trudeau’s compelling style.  But, it is difficult to define. Watch as he takes the stage – he exudes confidence.  Listen to the tenor and pace of his opening remarks – he has effortless dramatic timing.

“I dreamed of such splendid love… love for ourselves and for our country.” 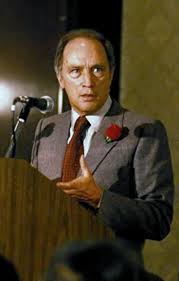 Throughout his years as PM, Pierre Elliott Trudeau was dedicated to federalism.  Though a francophone, he took on the Quebec separatists and fought for a bilingual Canada.  He begins his farewell speech in french and continues to transition back and forth between the two languages.  He embodies, in language and message, the central tenet of his political belief.

His ongoing belief and pride in his achievements are detailed in the list of accomplishments he summarises throughout the speech.  It is hard to believe one could manufacture such commitment as he details:

Trudeau shifts the scale from the national level to the family.  Reflecting on the tribute that was just paid to him as part of his farewell celebrations we see a rare moment of self deprecations.  As his three sons join him on the stage at the end of the speech we have an insight into the leader as a father. 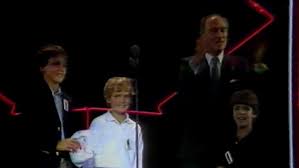 “How pleased and how grateful I was that my three boys could see that the line of business there day was in had some importance for this country.  And they will know that the time I spent away from them was working with Canadians but particularly with very nice Canadians who are in the Liberal party.”

Another aspect of Trudeau’s leadership style was his readiness to stand up to his opponents.  He had a confident, sometimes aggressive style which was usually unleashed in his speeches.  Even here, in a farewell address when there is nobody to battle, Trudeau shows us his signature style:

And his final remarks, as rousing and nationalistic as always:

“Our hopes are high.  Our faith in the people is great.  Our courage is strong.  And our dreams for this beautiful county will never die.”