Speech 22: Winston Churchill (On the beaches) 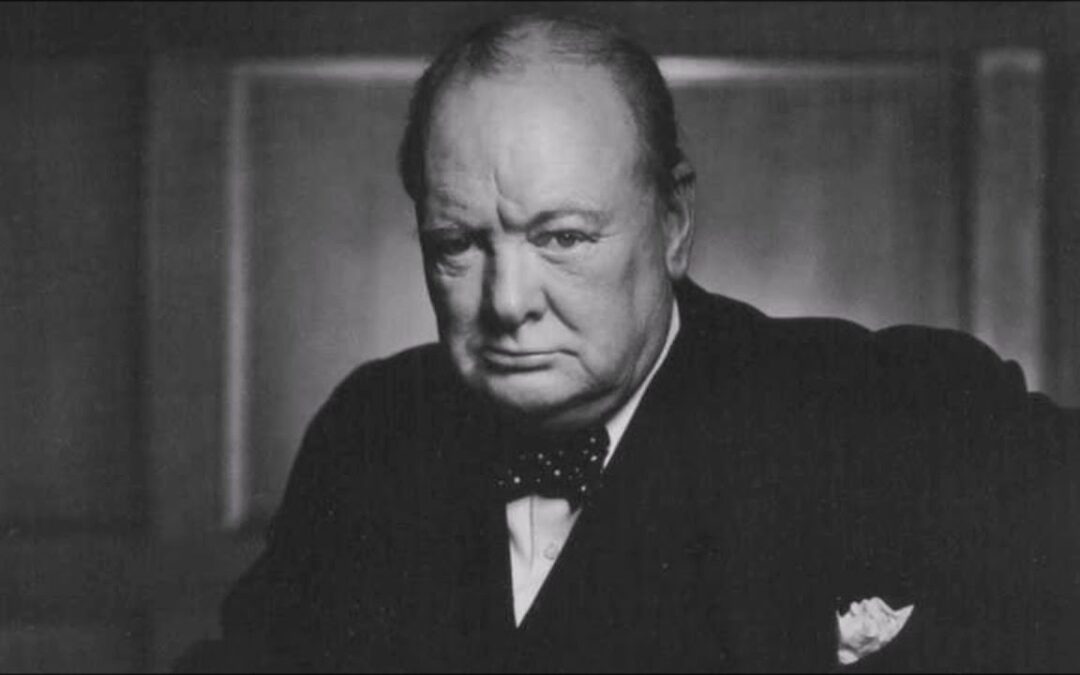 One of the most famous and often studied speeches of the 20th century is Winston Churchill’s address to the House of Commons on 4 June 1940; commonly titled; “We shall fight on the beaches”.

Churchill was a student of the classics, an expert in rhetorical technique and, by this stage in his career, a seasoned politician.  This speech stands out as the manifestation of all his talents, delivered at precisely the right time to have maximum effect.

What lessons in persuasion can we glean from this call to arms, delivered 80 years ago?

Use the arc of your speech to create energy.

The content and (presumably) delivery of Churchill’s address started slow.  Sentences were short.  The tone was sombre.  The volume was low.

Churchill then ramps up the speed. He introduces longer sentences and he quickens his pace.  The listener intuits that we are being swept along toward the climax of the speech.  We are waiting for the dramatic pay-off we know is coming.  By the time Churchill reaches the apex he has created exactly the mood he intends and his listeners are ready to respond.

Unlock the power of poetry to evoke a deep emotional connection.

The language used in ‘we shall fight on the beaches’ is lyrical.  Winston Churchill was a master of rhetoric and a student of classical technique.  In this speech, he demonstrates his expertise in the incorporation of poetic language and speechmaking.  He uses anaphora, tricolon, metaphor and meter with astounding results.

The gravity of the situation notwithstanding, this speech can be read as a work of art in its own right.

Any presentation, no matter how technical the subject matter, can be enhanced through an artful use of words of cadence.  As a first step, try varying your sentence length and pace and note the impact on your delivery.

Use imagery to make abstract or distant concepts more personal.

One of the reasons this speech lives on, 80 years after it was delivered, is the emotional resonance it creates for the audience.  So powerful, it endures all these years later. Emotional connection is critical if you are to change someone’s mind.

Again, Churchill unlocks the power of language.  He paints a picture of home.  We are not fighting to protect Great Britain, rather, this is ‘our island home’.  We are projected to the battle places; France, the seas and oceans, the air, the streets, the hills and indeed, the beaches.

The art of persuasion relies on the speaker correctly reading the mindset of the audience in the context of their environment.  Great speakers understand where to start and how to move hearts and minds – sometimes in tiny steps and sometimes in great leaps forward.  It all depends on the timing.

“We shall fight on the beaches” was delivered at a critical and delicate point in history.  Churchill needed to a) warn of the possibility of a German invasion, and b) remove doubt of a British victory.  No mean feat.  In this speech, he masterfully treads the line and creates the reaction he was seeking.

“Turning once again, and this time more generally, to the question of invasion, I would observe that there has never been a period in all these long centuries of which we boast when an absolute guarantee against invasion, still less against serious raids, could have been given to our people. In the days of Napoleon, of which I was speaking just now, the same wind which would have carried his transports across the Channel might have driven away the blockading fleet. There was always the chance, and it is that chance which has excited and befooled the imaginations of many Continental tyrants. Many are the tales that are told. We are assured that novel methods will be adopted, and when we see the originality of malice, the ingenuity of aggression, which our enemy displays, we may certainly prepare ourselves for every kind of novel stratagem and every kind of brutal and treacherous manœuvre. I think that no idea is so outlandish that it should not be considered and viewed with a searching, but at the same time, I hope, with a steady eye. We must never forget the solid assurances of sea power and those which belong to air power if it can be locally exercised.

Sir, I have, myself, full confidence that if all do their duty, if nothing is neglected, and if the best arrangements are made, as they are being made, we shall prove ourselves once more able to defend our island home, to ride out the storm of war, and to outlive the menace of tyranny, if necessary for years, if necessary alone. At any rate, that is what we are going to try to do. That is the resolve of His Majesty’s Government – every man of them. That is the will of Parliament and the nation. The British Empire and the French Republic, linked together in their cause and in their need, will defend to the death their native soil, aiding each other like good comrades to the utmost of their strength.

Here is a link to the full transcript of the “on the beaches” speech.

Here is the audio recording of the speech as broadcast on the BBC.  (Note:  not Churchill’s actual address in the house of commons as that was not recorded)