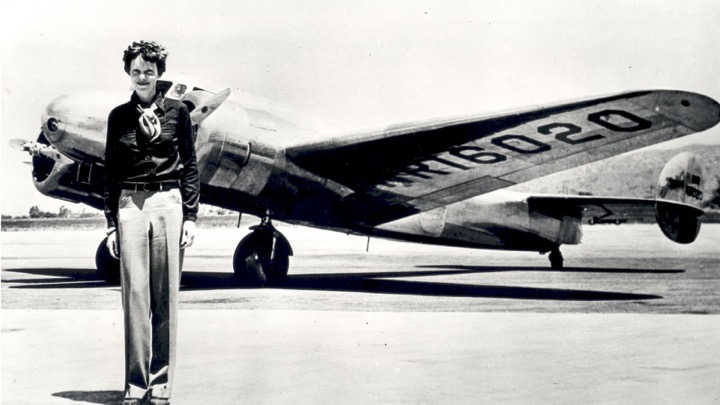 “Not only has applied science decreased the toil in the home, but it has provided undreamed of economic opportunities for women.”

Amelia Earhart delivered the speech; A Woman’s Place in Science, as a radio broadcast in 1935.  In 1928 Earhart was the first woman to fly solo across the Atlantic.  She was also a practised public speaker, spreading her message and the stories of personal achievement as part of her public career.

An early plea for women in STEM

This is a brief example (audio only) of Earhart’s clear-eyed and hope-filled message.  Have you ever felt like a pioneer?  Have you tried to break through traditions and expectations?  Perhaps you might find inspiration in this message from Amelia Earhart.

Through her message, we hear Earhart’s belief than women can and should take their place in whatever field they are most suited – in particular air travel.  Her argument is simple – if science can help alleviate the domestic burden then nothing should stand in our way.  Rather optimistic perhaps, but also uplifting (pun intended).

To connect the audience with the core of the message, Earhart uses the technique of starting with small, domestic examples of scientific advancement and what these can provide for the liberation of women.  Hopeing to catch everyone in her net.  Then she shifts to a loftier message; encouraging women into the workforce.  This participation should, Earhart proposes, extend to the field of science.  She clearly sees no innate barriers between the genders.

“Profound and stirring as have been accomplishments in the remoter fields of pure research, it is in the home that the applications of scientific achievement have perhaps been most far-reaching, and it is through changing conditions there that women have become the greatest beneficiaries in the modern scheme.  Although women as yet have not taken full advantage of its use and benefits, air travel is available to them as to men.

Earhart puts herself in the story.  This is not a disconnected lecture on what one should do or what one could do.  Instead, we get a glimpse into the passion and spirit of Earhart herself.  Where she has found wonder, forged a new path and unlocked a surprising future for herself.  Perhaps in recognition of the fact that her life is far from average, she begins by making her thesis relevant to those she perceives to be her audience – the housewife.

From the beginning, Earhart pleads relevance.  “This modern world of science and invention is of particular interest to women.  For the lives of women have been more affected by its new horizons than those of any other group.”  Such a challenge at the outset reduces the opportunity for targetted ears to tune out.

Lesson 3: End with a challenge

As so often happens in introducing the new or changing the old, public acceptance depends peculiarly upon women’s friendly attitude. In aviation, they are arbiters of whether or not their families shall fly, and as such, are a potent influence. And lastly, there is a place within the industry itself, for women who work.