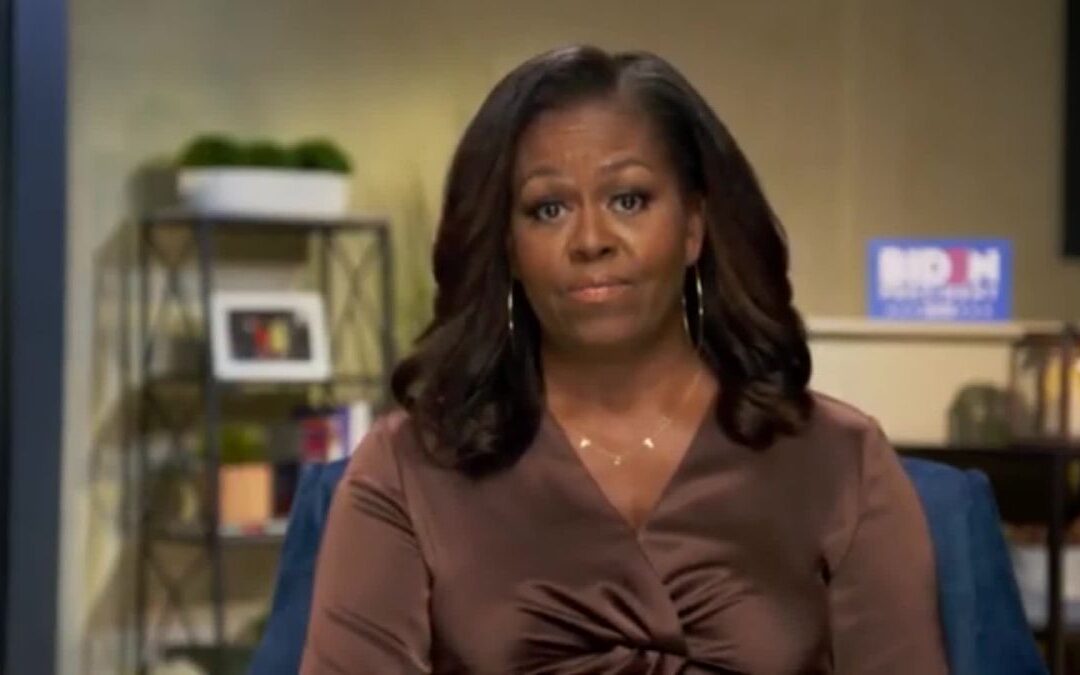 This week, Michelle Obama delivered a keynote speech on the opening night of the Democratic National Convention.  A convention like no other.  In the new world of virtual delivery, Obama spoke to camera whilst seated.

The speech was just over 18 minutes long and covered a bit of territory, but the uppercut came at about the 10-minute mark; when she emphatically states;

“Let me be as honest and clear as I possibly can.  Donald Trump is the wrong president for our country.  He has had more than enough time to prove that he can do the job, but he is clearly in over his head. He cannot meet this moment.”

Overwhelmingly, the tone of this speech is one of pathos.  The goal is to connect with the audience on an emotional level, then leverage the emotion to disrupt complacency and fuel frustration for the incumbent.  Following the briefest of salutations, Michelle Obama begins her address whilst adopting an imploring tone and slightly pained expression.  She uses words to highlight the current turmoil and difficulty – reflecting the felt impact of Covid-19, climate change and the Black Lives Matter movement in America.  Her words are intentionally emotive;

At about the one minute mark, Obama releases the pressure slightly with a micro smile and an allusion to hope.  Predicated on her audiences commitment to take action.  The tone of emotional engagement pervaded by a sense of concern with slight glimmers of hope is sustained throughout this address.

Back in 2016, Michelle Obama indicated her disdain for the mucky side of politics, and said ‘when they go low we go high’.  In this week’s DNC speech she resurrected this familiar refrain and used it as a leaping off point for the most poetic, metaphoric passage of the speech.  She seeks to inspire ethically sound thinking and action, by elaborating on what ‘going high’ means in our current context:

“(it means) taking the harder path…

…scraping and clawing our way to that mountain top…

…unlocking the shackles of lies and mistrust with the only thing that can truly set us free… the cold, hard truth.”

Of course, none of these phrases is actually definitive nor are they prescriptive.  But the lofty language calls upon the audience to do their civic duty.

Michelle Obama articulates what she sees as the fatal flaw in Trump’s character – a lack of empathy.  Rather than just describing the flaw as poor, untrustworthy and divisive, she acts it out.  Throughout the speech Obama’s expression is earnest. Her face is very expressive stretching from her set point of serious concern into frustration, exasperation and even desperation.  If Trump is cold, heartless and unfeeling, Obama will show you what passionate, altruistic and empathetic looks like.   She maintains this demeanour for the entire address.

The theme of empathy is a critical part of her message.  Obama’s words about the lack of empathy on display in the White House are carefully calibrated to instruct her audience to be better.  As a parent might lecture a child on the importance of the golden rule.  A return, perhaps, to her earlier role of ‘mom-in-chief’.

“Whenever we look to this White House for some leadership or consolation or any semblance of steadiness, what we get instead is chaos, division and a total and utter lack of empathy.  Empathy – that’s something I’ve been thinking a lot about lately.  The ability to walk in someone else’s shoes.  The recognition that someone else’s experience has value too.’

Towards the end of the speech, at about the 17-minute mark, Obama’s empathetic delivery reaches its crescendo.  The same emploring style is highlighted with dialled-up emotional expression and a wavering voice as she says;

“And when the horrors of systemic racism shook our country and our consciences, millions of Americans of every age, every background rose up to march for each other, crying out for justice and progress.
This is who we still are: compassionate, resilient, decent people whose fortunes are bound up with one another. And it is well past time for our leaders to once again reflect our truth.”

The Argument – We Don’t Want the Devil we Know…

Now, you might be wondering why there isn’t more attention paid to Obama’s support for the 2020 Democratic candidate, Joe Biden. Indeed, Obama spends a little time articulating Biden’s suitability for the role of president, but her points, though clearly stated, are not that memorable.  If we deconstruct the argument that exists beneath the emotional appeal, it is this:  The US is experiencing difficulty and pain on many fronts.  Trump does not care and cannot or will not take your pain away.  Therefore you must vote for the alternative.
Her main message is to take action so that Trump is NOT re-elected.  Her necklace spells out the speech’s thesis; V-O-T-E.

The Challenge of Virtual Delivery

Just like millions of workers around the world, the 2020 campaigns are faced with the challenge of remote delivery.  This is a serious challenge for the delivery of rousing speeches.  Of course, we lose something when the speaker cannot leverage the reaction of a live audience.  The energy level is lower when the speaker is seated and speaking directly to camera.  But, if we can take an optimistic lesson from Michelle Obama’s speech this week, it that a quiet, personal and intimate tone can be achieved.  The lens of the camera is aptly used as her proxy for eye-contact.  History will tell us, in a few short months, if this appeal was enough.
Full Speech Link.