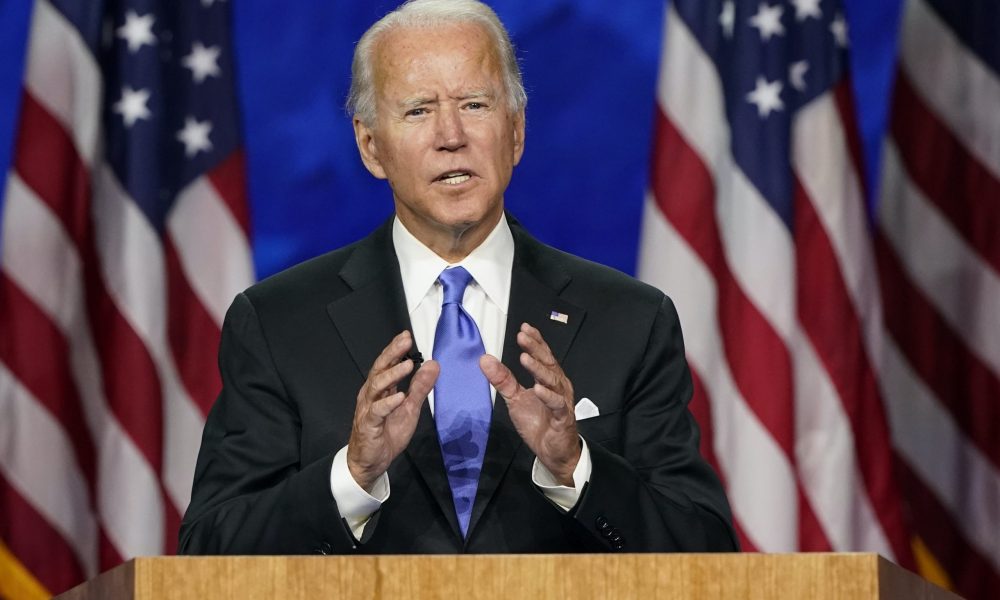 The 2020 Democratic National Convention was the first to be delivered as a virtual event.  There must have been hundreds of challenges to overcome – logistics, technology and participation.  But the most critical would have been how to generate real support for the Democratic candidate, Joe Biden.  Organisers would have spent months scratching their heads – how will we whip up a crowd? how will we create moments of patriotic fervour?  How will we build momentum for a critical election that is sure to be fraught?

On the fourth night of the convention, Joe Biden accepted the presidential nomination.  In doing so he delivered the most critical speech of the campaign.  In this address, he would need to take a stand and make clear his position against Trump.  He would be seeking not only to convince Democrats to get out and vote but also, to make it OK for Republicans to cross sides and throw their support behind this Democrat candidate.  So, how did he do?

A Message of Unity

“United we can and will overcome this season of darkness in America.  We’ll choose hope over fear, facts or fiction, fairness over privilege.  I’m a proud Democrat and I’ll be proud to carry the banner of our party to the general election.  So with great honour and humility, I accept this nomination for the President of the United States of America.  But while I’ll be a Democratic candidate I’ll be an American president.  I’ll work hard for those who didn’t support me.  As hard as I will for those who did support me.  Because that’s the job of a president”

Clear signalling here towards the opening of the speech that he will not be speaking just to his base.  An interesting strategic move, in line with many other messages over the previous four days seeking to encourage card-carrying Republicans to make the leap.

An Appeal to Character

Aristotle teaches us that persuasion has three forms, ethos, pathos and logos; the most important of which is ethos.  The audience needs to believe that the speaker has credibility.  We need to see the congruence between the content and the speaker.  In this case the bar is quite high.

The subtext of Joe Biden’s speech is essentially this:  Trust me, I’m a good guy.  I have sound experience, I care about people, I will do a good job.  In order to successfully tick the ethos ‘box,’ we need to witness each of these virtues.  We are prepped with a sense of Biden’s track record in the warm-up speeches.  He is introduced by his children who reference their late brother.  The bio reel strikes the right emotional notes, but importantly, focusses on his decency.  We hear about his years of service, award or honour and tenacity.  We get an insight into the tragedy he has experienced in his personal life and we are rightfully impressed by the personal resilience he must have fostered through it all.

It seems that empathy is the character trait Biden was seeking to highlight.  Surely, the contradiction with such a lack of empathy demonstrated by his opponent would further emphasise this virtue.  Biden does a great job of navigating through various emotional states depending on the message.  When he changes tack to speak about the suffering that some citizens are currently enduring he does so with grace:

“Look, I understand.  I understand how hard it is to have any hope right now.   On this summer night, Let me take a moment to speak to those of you who have lost the most.  I have some idea of how it feels to lose someone you love.  I know that deep black hole that opens up in the middle of your chest and you feel like you are being sucked into it…”

This is empathy personified. Mr Biden may have been referring to the tragic death of his first wife and daughter or perhaps recalling the more recent loss of his son, Beau Biden.  Either way, I believed the emotions were real.

Not ‘sleepy’ not ‘slow’ Joe Biden

On a few occasions in Biden’s speech we really see him fire up. This helps to support the overall impression he wants to create.  It must have been difficult because this address what delivered directly to camera.  The first flash comes in relation to the state of the nation, after recounting the current challenges Biden tells us ‘After all this time the president still does not have a plan.  Well, I do.’  Then comes the headline of a few policy moves.  He rounds out this assault by saying ‘Our current president has failed.  He has failed to protect America.  And my fellow Americans, that is unforgivable.’ Not so sleepy after all.

Reference to Presidents Past

Biden indulges in plenty of patriotic signalling.  To my non-American ear, I find such references a bit too much.  Early on, and in fitting with the theme of national unity, Americans are not just fellow citizens, but encapsulated in the rousing reflexive,  ‘we the people‘.

“to live up to and make real the words written in the sacred documents that founded this nation that all men are created equal.  Endowed by their creator with certain inalienable rights among them life, liberty and the pursuit of happiness.”

Reference to Franklin D Roosevelt and the post-war new deal was about much more than aligning himself with a respected former president.  Joe Biden was also signalling a policy position.  We should note that he will be prepared to make a significant policy change.  Perhaps a message intended for the more progressive Democrats.

Stagecraft would have been a concern.  No crowds, no falling balloons, no collective engagement.  Notice the frame is tight, Biden is flanked by American flags.  He could be seated at the Resolute Desk or delivering a presidential press conference.  The audience is meant to see him as presidential.

Overall, this speech did what it needed to do for Joe Biden’s campaign.  The ground didn’t shake, but we clearly saw a competent, experienced, empathetic man.  What a nice change that would be.

What the complete speech here.