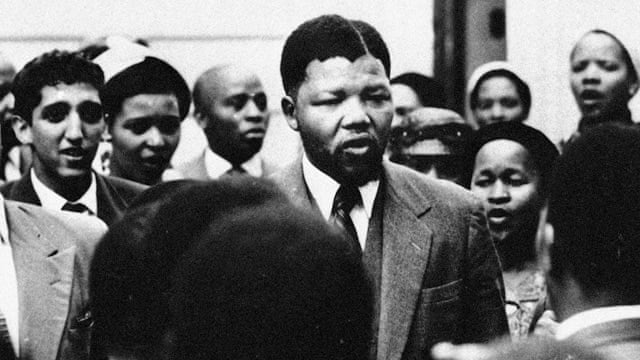 On the 20th of April 1964 Nelson Mandela delivered a powerful, restrained and poignant speech at his trial.

“An ideal for which I am prepared to die”

The words of Nelson Mandela’s speech made at his own trial on April 20th 1964 are haunting.  Not just because we know the ending to this story but for the power of the words themselves.  His speech is an extension of the man himself.  This is a demonstration of restraint but nonetheless powerful in its plea for justice.

Nelson Mandela, then leader of the African National Congress was accused of sabotage.  His speech illuminates his life-long struggle against the racist apartheid regime.

Nelson Mandela uses words sparingly.  His sentences are mostly brief and unadorned.  Descriptors and adverbs are rarely used.  Instead, we have straightforward statements of fact.  Mandela’s words allow the listener to see the world from his point of view.  As if it were being narrated as it is happening.

There are several statements that demand our attention.  They are uncomfortable, and deliberately so, to match the nature of the subject.

Above all, we want equal political rights.

The incidence of infant mortality is one of the highest in the world.

The lack of human dignity experienced by Africans is the direct result of the policy of white supremacy.

All around him, Mandela would have seen stark contrast in the quality of life between racially divided South Africans as a result of the apartheid regime.  The reality is brought into the courtroom by painting the picture of injustice through the use of contrast.  The images remain powerful in reading Mandela’s words all these years later.

The whites enjoy what might well be the highest standard of living in the world whilst Africans live in poverty.

Menial tasks in South Africa are invariably performed by Africans.  When anything has to be carried or cleaned the white man will look around for an African to do it for him, whether the African is employed by him or not.

Throughout his life, Mandela conducted himself with quiet resolve.  His leadership was enhanced by unquestionable bravery.  His style was not to use the fighting words of Malcolm X or the lyrical phraseology of Martin Luther King Jr.  Mandela speaks in a manner that is calm, in keeping with who he is.  Surely he was aware what the outcome of the trial was likely to be.  But he doesn’t throw himself on the mercy of the court.  He does not show weakness.  The emotional resonance in his words comes from commitment and conviction without a trace of fear.

The ethos of Nelson Mandela is encapsulated in his final words:

I have cherished the ideal of a democratic and free society in which all persons live together in harmony and with equal opportunities.  It is an ideal which I hope to live for an to achieve.  But if needs be, it is an ideal for which I am prepared to die.

Nelson Mandala was sentenced to life in prison.

Here is a powerful rendition of Mandela’s words performed by Lucian Msamati, produced by the Almeida Theatre.