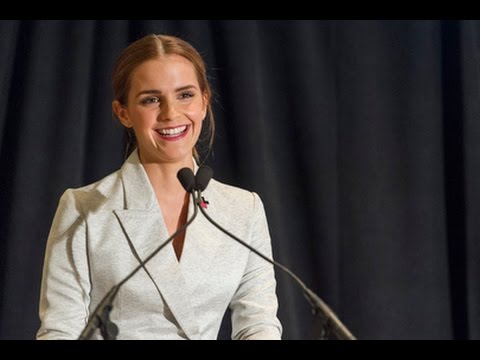 At the time of this speech, Emma Watson was best known for playing the role of Hermione Granger in the blockbuster movie adaptation of the Harry Potter series.  Rather than apologising, she uses her popularity to reach an enormous, global audience and speak out for a cause that is meaningful for her.  The fact that her character embodies many of the attributes of the modern feminist, the very subject of her speech, is a happy coincidence.

By adding her voice to the issue of feminism and the need for global action, Emma Watson will help to activate a new generation of women and men.  The fact that her face has instant recognition among young people (and their parents) results in instant attention.  The next challenge is for her is to use this platform effectively, to advance the cause.

What I most admire about Emma Watson’s speech is the fact that we can clearly see that she is experiencing some nervousness BUT she does not let that STOP her from delivering a powerful message.  In a way, her nervousness adds to her credibility.

Who wouldn’t feel nervous under such circumstances?  Remember, she was only in her mid-20s addressing a crowd of much older, perhaps distinguished delegates.  We sense she feels a little overwhelmed and her voice has a slight tremble.  We feel we are right there with her and wish her well.

The lesson here is not to worry about a few nerves.  We all have them.  Don’t apologise and don’t let them get in your way.  Instead, you can recognise the fact that your fear is evidence that you take the matter seriously.  That energy can be channelled into delivering a great speech.

An ‘issue-based’ speech always carries with it the challenge that your audience will have pre-conceived ideas and beliefs on the topic.  In this case, the subject is feminism.  The term will trigger a reaction.  The same goes for climate change or racism or socialism.  Our polarised world means that many of us have considered the subject and already chosen a side.

The other barrier to overcome is the chance that people are fatigued by the public dialogue.  The debate, it sometimes seems, has raged on for decades.  People may feel they have already heard everything that can be said on the topic.

Emma Watson uses her personal perspective to break through this resistance.

I started questioning gender-based assumptions a long time ago. When I was 8, I was confused for being called bossy because I wanted to direct the plays that we would put on for our parents, but the boys were not. When at 14, I started to be sexualized by certain elements of the media. When at 15, my girlfriends started dropping out of sports teams because they didn’t want to appear muscly. When at 18, my male friends were unable to express their feelings.

Watson uses contrast and shows some rhetorical flair in making her point:

Why has the word become such an uncomfortable one?

Emma Watson delivers a powerful closing statement in her speech by engaging the audience in the form of a challenge.  In an attempt to promote action she concludes with:

If you believe in equality, you might be one of those inadvertent feminists that I spoke of earlier, and for this, I applaud you. We are struggling for a uniting word, but the good news is, we have a uniting movement. It is called HeForShe. I invite you to step forward, to be seen and to ask yourself, “If not me, who? If not now, when?”