John F. Kennedy Speech (We choose to go to the moon) 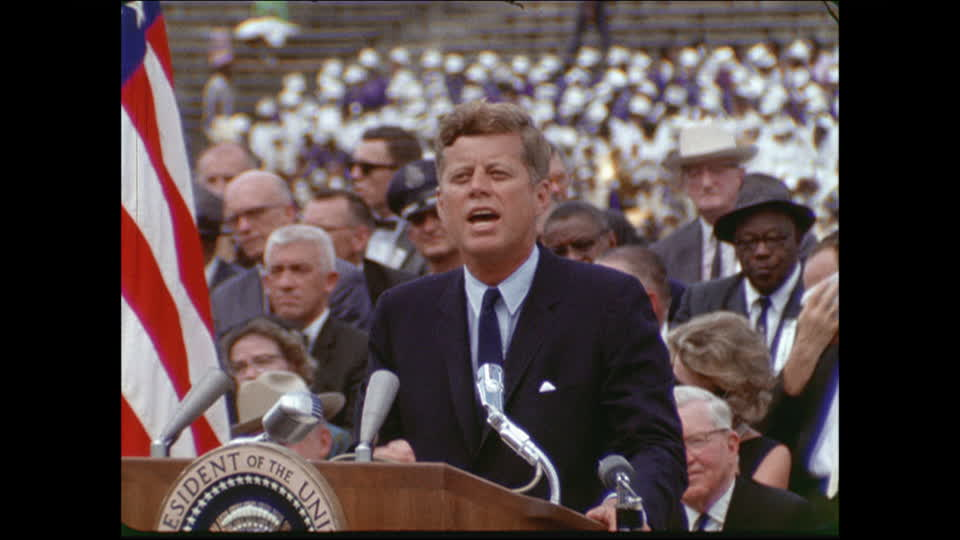 This iconic speech is a beautiful display of oratory and leadership.

“We choose to go to the moon”

On a baking hot day in September 1962, President John F. Kennedy spoke to an assembled crowd at Rice Stadium in Houston Texas. His mission was to inspire the audience and a nation to support an incredibly ambitious idea – no more than a dream at the time – to send a man to the moon.
This was no small challenge.  An exercise in persuasion not dissimilar to the Herculean task before the astronauts and scientists of the Apollo program. The notion of putting a man on the moon was hugely ambitious.

An Appeal to Patriotism

In this speech, Kennedy makes space the new frontier.  Then he evokes the pioneering spirit, deeply held in the American psyche, to generate enthusiasm.  This a big play.  And it pays off.
Public opinion, at the time, was not necessarily in favour of such an ardent project.  The scale of the initiative was vast.  This would be a decade long project with a questionable payoff.  Also, people were somewhat dejected that the US was lagging the USSR in the space race.
Given the atmosphere of apathy peppered with a bit of dejection, JFK daringly and rightly chose the patriotic plea.  Such a plea must be accompanied by the right level of conviction from the speaker.  We have to see that you are all-in. After carefully laying the groundwork, he punches out his primary platform:

First, we have the notion of the history of humanity being played out over just 50 years. This clever device allows him to diminish the aggressive nature of his plan.
This is a reasonably complex metaphor requiring a bit of mental work on the part of the audience. The technique might not play so well in today’s sound bite world of reporting. You can’t fit this in a 280 character tweet.  I have emphasised the time markers Kennedy used:

“But condense if you will the 50,000 years of man’s recorded history in a time span of but a half a century.  Stated in these terms we know very little about the first 40 years.  Except at the end of them, advanced man had learned to use the skins of animals to cover them.  Then about 10 years ago, by this standard, man emerged from his caves to construct other kinds of shelter.  Only 5 years ago man learned to write and use a cart with wheels.  Christianity began less than two years ago.  The printing press came this year.  And then less than two months ago, during this whole 50-year span of human history the steam engine provided a new source of power.  Newton explored the meaning of gravity.  Last month electric lights and telephones and automobiles and aeroplanes became available.  Only last week did we develop penicillin, and television and nuclear power.  And now if America’s new spacecraft succeeds in reaching Venus we will have literally reached the stars before midnight tonight.  This is a breathtaking pace.”

Then we have the interesting, and slightly convoluted metaphor of the ocean. Serving the purpose of highlighting a weak, lily-livered kind of person you would be if you considered NOT supporting the idea of spending untold millions to put a man on the moon.

“We set sail on this new sea because there is new knowledge to be gained and new rights to be won and they must be won and used for the progress of all people… And only if the United States occupies a position of pre-eminence can we help decide whether this new ocean will be a sea of peace or a new terrifying theatre of war.”

Are we at sea or in a theatre?
Kennedy employs another metaphor for answering the question ‘why’.  Mohammed’s mountain – or is George Mallory’s? – provides the image of climbing and ultimate conquest, connects believers to historic achievements and gets around the need for rational argument or any discussion of cost-benefit analysis.

“But why some say, the moon?  Why choose this as our goal?  Why climb the highest mountain?  Why 35 years ago, fly the Atlantic?  Why does Rice play Texas?…

“Many years ago the great British explorer Goerge Mallory, who was to die on Mount Everest, was asked why did he want to climb it.  He said, because it is there.  Well, space is there and we are going to climb it.  And the moon and the planets are there.  And new hopes for knowledge and peace are there.  And therefore as we set sail we ask God’s blessing…”

Are we climbing or are we sailing?  Oh, who cares.

Like Obama and King, JFK speaks with a certain degree of formality. There is a loftiness to his style that serves to elevate his subject.  Although Kennedy does rely on his notes, he is well prepared.  He is clearly familiar with the overall arc of the speech and he delivers it as a polished robust performance.
There are evident notes of rhetorical style, sophisticated phraseology and innovative language.  Kennedy is a master of delivery.  His personal charisma coupled with the power of the position is the perfect springboard for the words of this speech to take flight.
Honourable mention must be given to Ted Sorensen – speechwriter and adviser to JFK.  Theirs was a symbiotic relationship.  Sorensen had a deep understanding of Kennedy’s style and skill, allowing him to assemble speeches like this that sound natural and evoke commitment.
Supreme eloquence.
Watch the video here.