Oprah Winfrey (SPEECH: Their time is up) 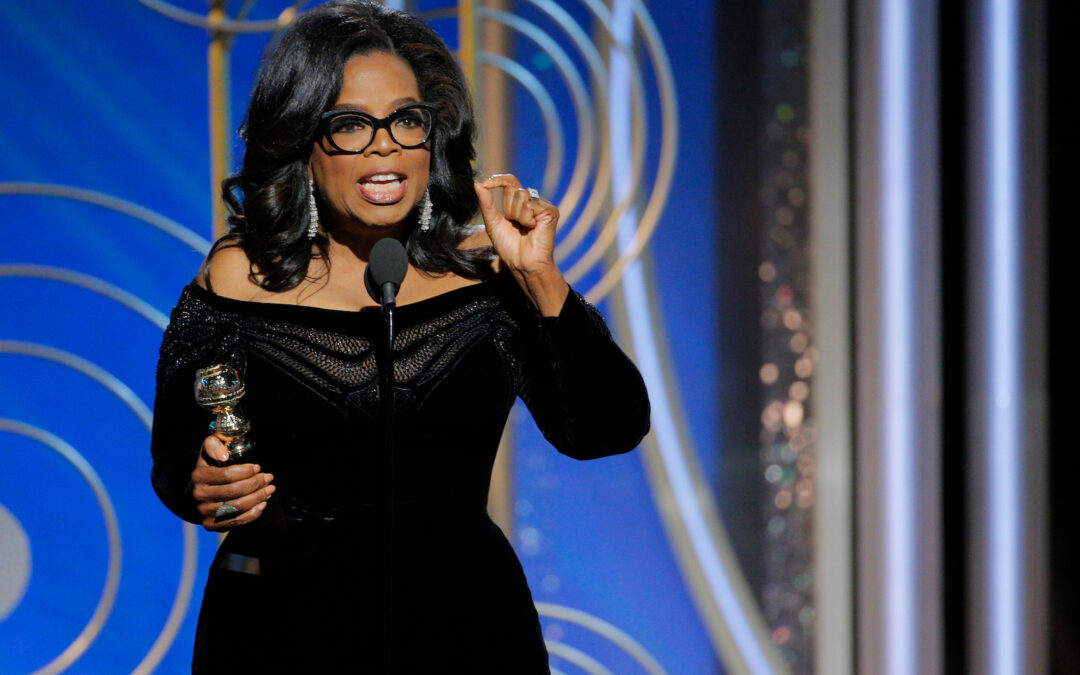 Oprah Winfrey was given a lifetime achievement award at the Golden Globes on 7 January 2018.  She used this occasion, and her powerful platform to make a stand.

This is a speech for the history books and speech that helped shape history.  At the time, the MeToo movement was rapidly gaining worldwide momentum.  The genius of this speech is that Oprah nails the zeitgeist – the right message, to the right audience at the right time.

This short speech offers the everyday communicator some awesome lessons…

Driving Change from the Inside

Throughout her career, Oprah Winfrey has been at the vanguard of change.  Through her media presence and notoriety, she has changed the way people think and feel about a whole range of issues from the banal (folding fitted sheets) to the fundamental (societal tendency toward victim-blaming) and everything in between.

You may have missed the impact she has had because she drives change from the inside.  For years, she was projected into our living rooms.  Millions of people come to trust her for the way she demonstrated empathy in her interviews on the Oprah Show.  When she welcomed a relatively unknown Senator, called Barrack Obama, things really started to change.

In this speech, she throws her voice behind the growing chorus speaking out in what is now known as the #MeToo movement.  Adding significant momentum and fueling the winds of change.

Stories are a means of communication common across all cultures.  Oprah uses the power of story to grab our attention right from the start.  Note the specificity of language.  She paints the picture for us.  With only a few words we are transported to her mother’s kitchen in Milwaukee.

Then she saw Sidney Poitier awarded the Academy Award

And just like that, only having spoken for about one minute, she has drawn us in.

Later in the speech, the same storytelling skill is employed to bring the experience of Recy Taylor back in 1944 right into the room with the well-heeled Hollywood elite:

“Recy Taylor, a name I know and I think you should know, too. In 1944, Recy Taylor was a young wife and a mother. She was just walking home from a church service she’d attended in Abbeville, Ala., when she was abducted by six armed white men, raped and left blindfolded by the side of the road, coming home from church. They threatened to kill her if she ever told anyone, but her story was reported to the N.A.A.C.P., where a young worker by the name of Rosa Parks became the lead investigator on her case and together they sought justice. But justice wasn’t an option in the era of Jim Crow. The men who tried to destroy her were never persecuted. Recy Taylor died 10 days ago, just shy of her 98th birthday. She lived, as we all have lived, too many years in a culture broken by brutally powerful men.”

Oprah has consistently demonstrated the qualities of curiosity, empathy and justice throughout her career.   Because she is so well known and admired by many, we are predisposed to trust what she has to say.  The Oprah we see take the stage here is reminiscent of the Oprah we have always known.  That consistency is important in reinforcing latent trust.  But there is also something a little bit different.  Certainly, she is fired up – we have seen that before.  She is eloquent – also a hallmark of her suite of talents.  But she is also FED UP.  Ready to take a stand and ready to make it personal.

A Platform Used for Good

The statistics to support Oprah’s worldwide acclaim undeniably make her one of the world’s most influential people.  Her platform is awesome.  You would need a handful of senior politicians, captains of industry, a few sporting stars and a couple of Kardashians combined to come close to the scale of the platform that Oprah Winfrey has constructed over the past 40 years.

One of the most remarkable things about this speech is that she mindfully uses this platform for a purpose.  Her purpose is lofty, and she goes all in – sweeping the audience along with her.

“What I know for sure is that speaking your truth is the most powerful tool we all have.”

Ever the optimist, Oprah is all about looking straight at the truth and building a new vision of hope.  Often we have heard Oprah Winfrey come back to the next generation of women, choosing to influence the girls of today.  This speech echoed her familiar refrain.  Certainly, the language is strident, even evangelical, but it is delivered brilliantly, resulting in a well-deserved standing O.

“So I want all the girls watching here and now to know that a new day is on the horizon! And when that new day finally dawns, it will be because of a lot of magnificent women, many of whom are right here in this room tonight, and some pretty phenomenal men, fighting hard to make sure that they become the leaders who take us to the time when nobody ever has to say, ‘Me too’ again. Thank you.”