Speech 19: Eleanor Roosevelt (we know what we have to face) 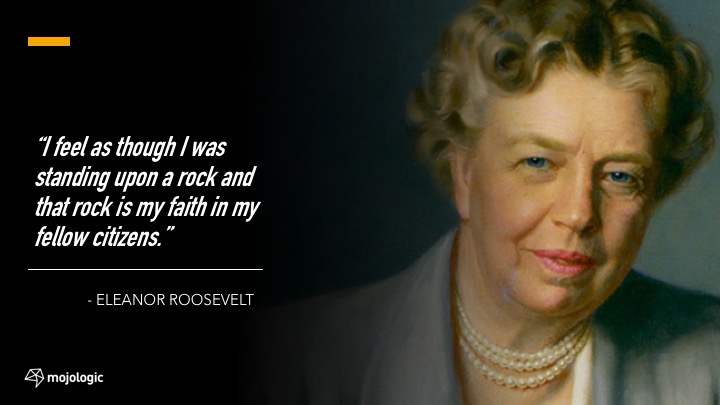 “We know what we have to face and we know that we are ready to face it.”

The brave, calm and resolute radio address from Eleanor Roosevelt, the First Lady of the United States, on 7 December 1941, following the attack on Pearl Harbor.

Calm Before the Storm

When it comes to communication in times of upheaval, timing is everything.  Eleanor Roosevelt was the first to address the nation following the Japanese attack at Pearl Harbor during WWII.  The First Lady alludes to the official communication that was to come the next morning; “by tomorrow morning the members of Congress will have a full report and be ready for action“.  The next day will bring FDR’s famous address about a day that will ‘live in infamy’.  But on this day, in the immediate aftermath, the American people are reassured by the words of Eleanor Roosevelt.

“I am speaking to you tonight at a very serious moment in our history.  The cabinet is convening and the leaders in Congress are meeting with the President.  The State Department and Army and Navy officials have been with the president all afternoon.  In fact, the Japanese Ambassador was talking to the President at the very time that Japan’s airships were bombing our citizens in Hawaii and the Phillipines and sinking one of our transports on the way to Hawaii.”

Once she has made it clear that the President would address the nation the next day with the official response, she goes on to do her part – communicating directly to the people, and acknowledging how they must be feeling.

Throughout this short address, ER exhibits calmness and strength.  Her language is clear, her pace is steady and her message is resolute.  She manages to strike the perfect note for the occasion.  We will see a similar mastery of timing when Ronald Reagan addresses the nation in the immediate aftermath of the space shuttle Challenger disaster.

About halfway through the address, Mrs Roosevelt shifts gears and signals that she is speaking directly “to the women in the country tonight“.  Connecting as a mother, to other mothers, she seeks to recognise the emotional toll, empathise with the inevitable feeling of fear, and encourage resilience and strength.  By mentioning her own children we have some insight into her character.  These are not just the words of a politician (or the wife of a politician) but a mother whom herself feels the fear of her own children in danger.

“I have a boy at sea on a destroyer.  For all I know he may be on his way to the Pacific.  Two of my children are in coast cities on the Pacific.  Many of you all over this country have boys in the services who will now be called upon to go into action.”

Then with the use of an evocative metaphor, she implores her audience to respond as they should:

To round out her radio address she directly speaks to the young people of America.  Again, we will see a very similar technique in Reagan’s 1986 television address.  But Eleanor Roosevelt subtly adjusts her tone.  We can hear the voice of the mother taking on a caring but steadfast role with her children.

“To the young people of the nation, I must speak a word tonight.  You are going to have a great opportunity.  There will be high moments in which your strength and ability will be tested.”

And then, her most powerful ethical appeal – this patriotic call to the nation:

“I have faith in you.  I feel as though I am standing upon a rock and that rock is my faith in my fellow citizens.”

The character and leadership encapsulated in this short radio address reflect a woman that we can all admire.  Would that she was with us today to reassure a citizenry of their own innate power as the “free and unconquerable people of the United States of America“.