Speech 02: Ronald Reagan (I have slipped the surly bonds of earth) 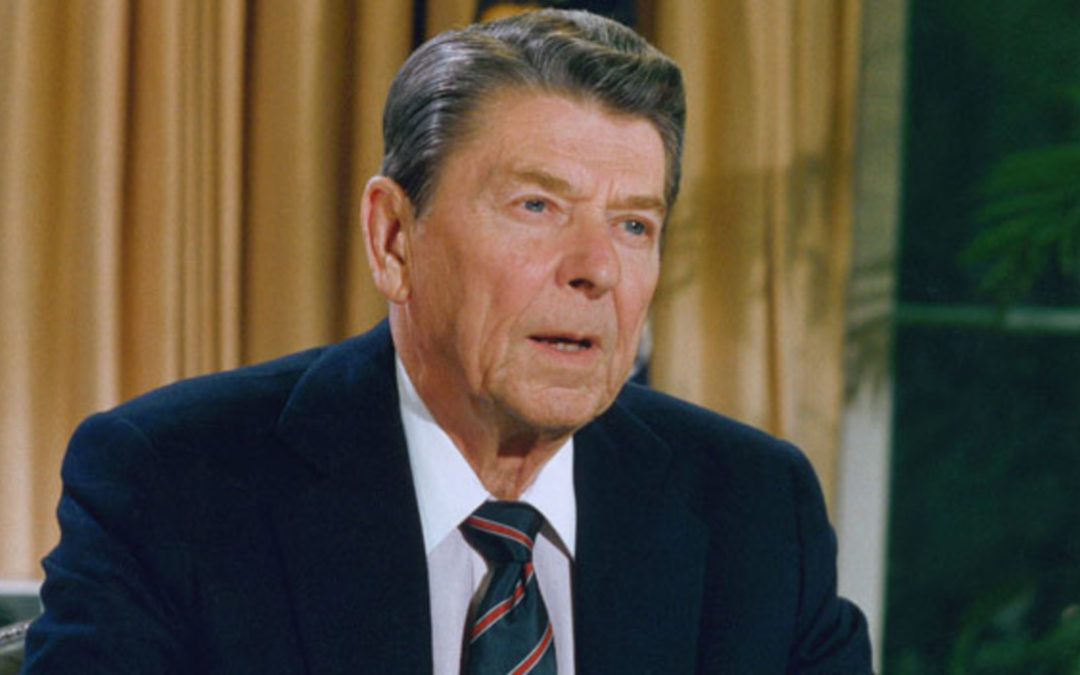 Pathos with a dash of politics: Ronald Reagan, 1986

On the 28th of January, 1986 the world witnessed the disastrous explosion of the space shuttle Challenger. Ronald Reagan addressed his country and the world in the aftermath of the tragedy.

This was a powerful speech of historical significance. It is an outstanding example of how a leader can in fact find just what to say when it may seem that no words will suffice. Reagan masters the art of pathos, but does not miss the opportunity to embed his ideological stance.

Back in 1986, the launching of a space shuttle was a significant event. The United States and its allies were engaged in a cold war and the ‘space race’ was the frontier of the day.

Every newspaper, TV and radio broadcast heralded the historic event. Most people at the time were aware of the mission and many would have made a point to tune in to see the action live on television. Office workers paused, tools were downed and television sets were wheeled into classrooms. Americans had seen pictures of the astronauts and were well versed in their backstory. School children had selected their hero.

The crew of the 1986 Challenger included the historic addition of an ‘ordinary’ citizen – school teacher Christa McAuliffe – making us all feel as though such adventure was within our reach.

At 11.39 am we had lift-off. 73 seconds later the space shuttle Challenger exploded.

Reagan’s words and skilful delivery struck precisely the right chord. At the outset, he makes it clear that ‘today is a day for mourning and remembering‘. What he does not say is that this means it is not a day for blame, technical analysis or political posturing.

He goes on to recognise the impact of the loss on the country and the families of the crew. He does this without breaking his gaze into the camera, signalling his own bravery and emotional investment. Many find such messages of condolences uncomfortable – they squirm, look away and use words that come out sounding like a cheap sympathy card.

This stands out as one of the finest displays of pathos from a modern leader. Reagan manages to exude sympathy whilst maintaining his positional and personal strenth (ethos).

In his address, Reagon creates a purpose in the loss. Perhaps to overcome a sense among the American public that this could be interpreted as a ‘senseless’ tragedy – he makes some sense of it by connecting the loss to a mission that cannot be questioned – the pioneering spirit of the USA. He assures viewers that the loss of human life was not in vain.

Reagan knew (or was rightly advised) that children were fascinated by the launch. Like their parents, the kids needed some rationale for understanding what they had seen. In an aside, and just for them he says:

I want to say something to the schoolchildren of America who were watching the footage of the space shuttle’s take off. I know its hard to understand, but sometimes painful things like this happen. Its all part of the process of exploration and discovery. Its all part of taking a chance and expanding man’s horizons. The future doesn’t belong to the feint-hearted. It belongs to the brave.

The Challenger crew was pulling us into the future and we will continue to follow them.

Like a Shakespearean aside, the device of speaking directly to the children provides the platform for the president to communicate his subtextual message that the space program (perhaps US foreign policy in general) will not be deterred by this disaster.

Despite the overarching tone of sympathy – Reagan seizes an opportunity to emphasise his well known anti-Soviet ideology. He knows who else might be listening.

We don’t hide our space program. We don’t keep secrets and cover things up. We do it all up front and in public. That’s the way freedom is and we wouldn’t change it for a minute.

Regan reserves the most powerful words for the end of his address. This appeal to emotion is exactly the right occasion for the evocative language of poetry. In this case, an indirect but unmistakable borrowed verse from the poem High Flight by John Gillespie Magee, Jnr is woven into the text.

We will never forget them, nor the last time we saw them this morning as they prepared for their journey and waved goodbye, and;

slipped the surly bonds of earth to touch the face of God.

Credit must also be given to Peggy Noonan who was Ronald Regan’s speechwriter at the time. She crafted the address, included the poetic element and balanced the message.

Noonon, herself a Republican ideologue, also displayed an admirable way with words, bringing literary resonance to otherwise pragmatic political messages. In the words of one reviewer, ‘Ms Noonan can evoke a mood like nobody’s business’.

So, if Peggy Noonan was responsible for the words, then that means only the delivery can be attributed to the president. Ronal Reagan, of course, was previously a Hollywood actor. Is this a well-played act of presidential pathos and strength, or the real thing?