Speech 20: Franklin Roosevelt (a day that will live in infamy) 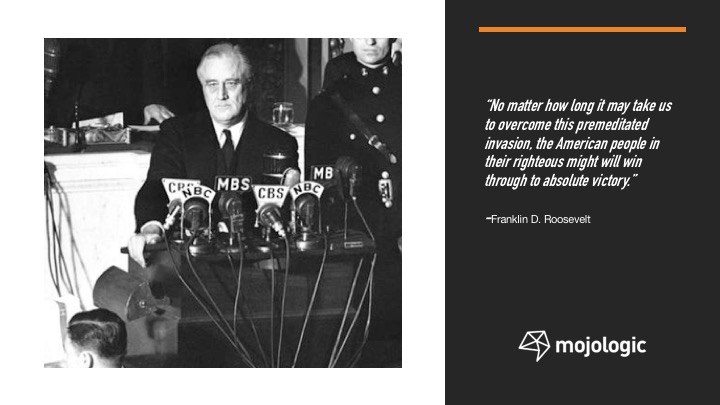 “It will be recorded that the distance of Hawaii from Japan makes it obvious that the attack was deliberately planned many days or even weeks ago.  During the intervening time, the Japanese government has deliberately sought to deceive the United States by false statements and expressions of hope for continued peace.”

FDR responded to the Japanese attack on Pearl Harbour with a speech the following day, delivered in Washington DC.  President Roosevelt’s purpose was two-fold; to address the nation in a time of upheaval and to generate support from Congress for the declaration of war.

His language was succinct and his delivery perfunctory. This is a short speech at just over three minutes.  His manner is grave, matching the tone required of the occasion.

President Roosevelt’s opening remarks are delivered slowly.  He draws his audience down into their seats and has them listening intently;

“Mr Vice President, Mr Spearker, members of the Senate and the House of Representatives.

Yesterday December 7th 1941, a date which will live in infamy, the United States of America was suddenly and deliberately attacked by naval and air forces of the Empire of Japan.

The United States was at peace with that nation and at the solicitation of Japan was still in conversation with its government and it Emperor looking towards the maintenance of peace in the Pacific.”

The controlled anger is palpable with the lengthy pause following this statement:

“But always will our whole nation remember the character of the onslaught against us.”

And then an ethical appeal to defend against the premeditated (unjust) attack coupled with a patriotic plea which generates the assembly.  FDR is undoubtedly successful in garnering support for his response.

“No matter how long it may take us to overcome this premeditated invasion, the American people in their righteous might will win through to absolute victory.”

Even in this brief speech, we have two clear examples of alliteration, delivered with pneumatic resonance:

“There is no blinking at the fact that OUR people, OUR territory and OUR interests are in grave danger.  With confidence in OUR armed forces, with the unbounding determination fo OUR people, we will gain the inevitable triumph, so help us God.”