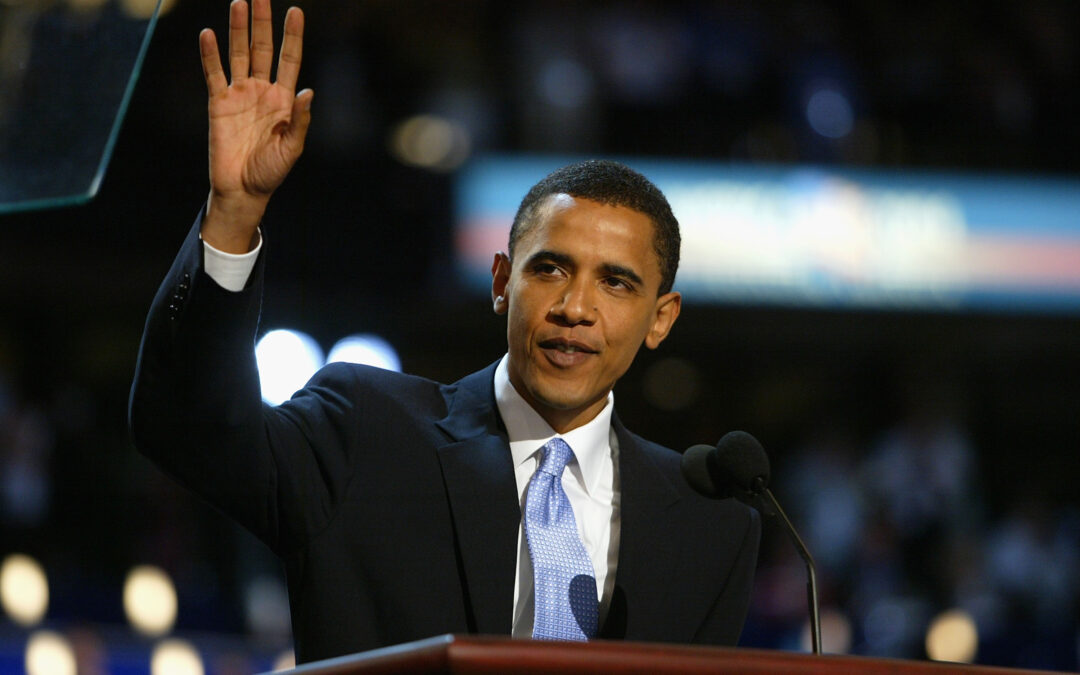 It’s that fundamental belief — I am my brother’s keeper, I am my sisters’ keeper — that makes this country work. It’s what allows us to pursue our individual dreams, yet still come together as a single American family. “E pluribus unum.” Out of many, one.

In 2004, then Illinois senate candidate, Barack Obama delivered the keynote address at the Democratic National Convention in Boston.  At this point, Obama was not particularly well known.  This fine example of oratorical mastery helped to propel him forward in the minds of his party, his country and the world.

This is the speech that set Obama on the path to his presidency.

At the podium, Obama almost always adopts a high, or formal, style.  He accesses a vast vocabulary, is comfortable with literary allusions and even happy to throw in the odd bit of Latin.  Certainly not casting himself in the role of ‘a knock-about’.  Neither does he use his mastery of language as an instrument of superiority.

The unique ‘Obama-esque’ style is rather more enigmatic.

Barack Obama debuts what will become his signature style in this speech.  A formality that manages to reach across social and economic divides.  His style is much more that the words he uses or even the references he makes.

The language is lofty indeed but coupled with the sense of occasion, a receptive audience and the ability to connect on an emotional level – such lofty expressions as these carry power:

I believe that as we stand on the crossroads of history, we can make the right choices, and meet the challenges that face us. America!

Obama strengthens his position by borrowing credibility from his political forebearers.  He alludes to the intentions of the founders as the measure for what one ought to do, rather than being mired in the day to day political wrangling of an election.

Our pride is based on a very simple premise, summed up in a declaration made over two hundred years ago, “We hold these truths to be self-evident, that all men are created equal. That they are endowed by their Creator with certain inalienable rights. That among these are life, liberty and the pursuit of happiness.”

This year, in this election, we are called to reaffirm our values and commitments, to hold them against a hard reality and see how we are measuring up, to the legacy of our forbearers, and the promise of future generations.

How does Barack Obama, in such a short speech, manage to form an emotional connection with so many people?  He does this by balancing his high style with a more commonplace method of communication. Like many great speakers, he uses concrete rather than abstract language to form a human connection.  By describing specific people, places and things his audience is drawn into the story.

In analysing this technique, I am reminded of the iconic ‘I Have a Dream” speech by Martin Luther King Jnr where we are transported to “the red hills of Georgian” and Dr King’s “four little children”.

He opens with a story that is deeply personal.  Obama tells us of his parents and his grandparents – the dreams they had and the hopes they shared.  He paints a picture of the lives that they each led.  We are transported to the village in Kenya and a starter home in Kansas.

This is a masterstroke in building a strong connection to hook in the audience.  The power of this particular story is amplified by hitting all three key tenets:

Once the story is told, Obama makes sure to make the connection to his thesis clear:

I stand here today, grateful for the diversity of my heritage, aware that my parents’ dreams live on in my precious daughters. I stand here knowing that my story is part of the larger American story, that I owe a debt to all of those who came before me, and that, in no other country on earth, is my story even possible.

Barack Obama is skilled in rhetorical technique.  Like all skilled rhetoricians, he manages to hide the mechanics the craft in favour of the overall impact of his message – here are some examples:

Anaphora is when you repeat a word or phrase at the beginning of successive clauses.

The crossroads of history…

The Audacity of Hope

This is a speech that launched a president.  A fine example of oratorical genius that inspires adacious hope.