Speech 15: Margaret Thatcher (the lady’s not for turning) 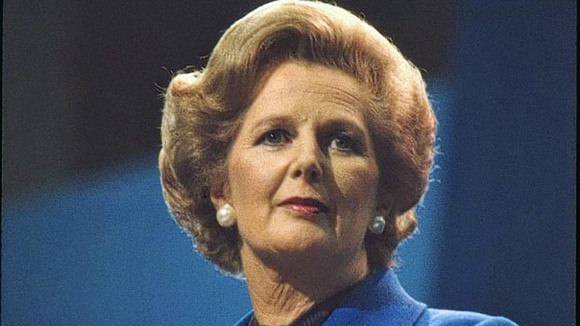 You turn if you want too, the lady’s not for turning.

Margaret Thatcher delivered a lengthy (40min) speech on October 8th, 1980 to the Conservative Party Conference in Brighton, UK.  She had a lot to say and there is much to analyse, but this phrase lives on in infamy.  Perhaps because it is rather enigmatic and therefore interesting.  A play on The Lady’s Not for Burning, a 1948 play by Christopher Fry about a witchcraft trial.  Here is the quote with a little bit more context:

To those waiting with baited breath for that favourite media catchphrase the “U-turn,” I have only one thing to say: You turn if you want to: The lady’s not for turning. And I say that not only to you but to our friends overseas as well, and also to those who are not our friends.

When Thatcher delivered this speech she had been in power for about a year and in that time unemployment had risen from one and a half to two million.  In addition to facing opposition from the cross-benches and the public, she was also fending off criticism from within her own party.  Some conservatives opposed Thatcher’s radical free-market policies.

In this speech, particularly this declaration of strength Thatcher signals her commitment to the policy she has set in motion.  Indeed, most of the speech is about arguing for and defending the course of action she has established.

Now, I myself am not, nor have I ever been a citizen of the United Kingdom.  But, I am well aware that the mere mention Margaret Thatcher’s name can provoke strong reactions among many.  Part of the reason is that she quite clearly, deliberately and unwaveringly stood for something.  If that something is in opposition to your own ideology, then then the middle ground can seem unobtainable.

The purpose of this analysis is to explore Thatcher’s style and technique, rather than comment on her ideology per se.  There is much we can learn from disassembling the defining speeches of those who we disagree with the most.

It’s sometimes said that because of our past we, as a people, expect too much and set our sights too high. Mr. Chairman, that’s not the way I see it. Rather it seems to me that throughout my life in politics our ambitions have steadily shrunk; and our response to disappointment hasn’t been to lengthen our stride but to shorten the distance to be covered. But with confidence in ourselves and in our future what a nation we could be.

The Iron Lady is all-in.

At one point in this speech, a protester shouts “power to the workers. Tories out!”

Thatcher uses this as an opportunity to retort;

Never mind — it’s wet outside. I expect they wanted to come in. We can’t blame them; it’s always better where the Tories are. And you — and perhaps they — will be looking to me this afternoon for an indication of how the government sees the task before us and why we’re tackling it the way we are.

Showing a certain level of comfort in her position at the podium.  Whilst her speech is no doubt fully prepared – such off-the-cuff refutations are a sign of oratorical skill.

Typically, Margaret Thatcher is light on the use of metaphor.  And this speech is no exception.  Her persona is pragmatic and her rhetoric is generally aligned to that identity.  However, Thatcher indulges in this particularly effective rhetorical flourish:

So Mr. Chairman, what could stop us from achieving this? What then stands in our way? The prospect of another winter of discontent? I suppose it might.

But I prefer to believe that certain lessons have been learned from experience, that we are coming slowly, painfully to an autumn of understanding. And I hope it will be followed by a winter of common sense. If it isn’t we shall not be diverted from our course.

And in another clever maneuver, she turns the opposition’s metaphor around and uses it in refutation:

In highlighting the successes of the party, Thatcher is diligent in mentioning those involved by name.  She begins by thanking her husband, Denis Thatcher.  She mentions her deputy Willie Whitelaw and the budget created by  Geoffrey Howe.

She goes on to share the limelight with multiple players including; Jim Prior, Keith Joseph, David Howell, John Nott, and Norman Fowler.  Then Michale Heseltine, Anthony Eden, Lord Carrington — and the list goes on.

Thatcher tends to err on the side of logos over pathos.  There is little emotional connection attempted and even less demonstration of her own emotion.  Is this a shortcoming?

Perhaps, in analysing this speech alone, you would observe a missed opportunity.  However, overall, this omission could be perceived as consistent with her persona – ie. pragmatic, courageous, resilient.

In a strange combination of rhetoric and refutation, Thatcher delivers this statement in response to her critics:

The argument here is:

If there was a magic button I would push it.
There is no magic button.
Therefore, what I am doing should be understood to be the next best thing.

This is an example of the flawed reasoning that pops up again with this statement:

If spending money like water was the answer to our country’s problems we would have no problems now.  Because if ever a nation has spent, spent and spent again, ours has.  And today that dream is over.  All the money has got us nowhere and yet it has to come from somewhere.

Is it possible that, in the absence of pathos, we are less likely to zero in on the logical construction of an argument?  To pick apart the false premises, fallacies and false conclusions.  Which then leads to conclusions such that voiced below – and its profound implications on policy.

Of course our vision and our aims goes far beyond the complex arguments of economics but unelss we get the economy right we shall deny our people the opportunity to share that vision and to see beyond the narrow horizons of economic necessity.

And finally, this piece of circular reasoning:

This speech is but one example of several delivered by Margaret Thatcher in her many years in politics.  It is a fine example of her speechcraft in which she uses the podium, as all politicians must, to reiterate and reinforce her platform.  To whip up support among her own party and knock back her opponents.

The full version of her speech can be found here: